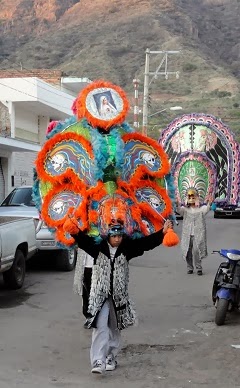 This is the second time we've been able to enjoy the Fiesta Patronales in Jocotepec. The Patronales is a two week celebration dedicated to the first patron saint of Jocotepec, Nuestro Senor del Monte, or Lord of the Mountain. There's a desfiles (parade) or peregrinación (pilgrimage) every day or night complete with marching bands, floats, dancers and fireworks. The streets are blocked off so that vendors can set up their numerous stands selling a variety of goods and food. We attended one of the parades at night but my pictures didn't turn out. However, we were in town as they were getting ready for the parade and I got some photos of the kids getting ready. 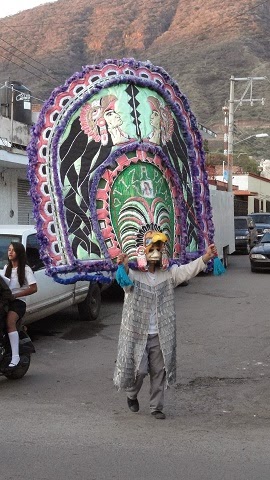 They carried these huge headdresses that must have weighed more than they did. It looked like they were balanced on their shoulders and they held onto ropes attached somehow to the headdress. Their robes looked like they were made from some type of metal. Very elaborate and I have no idea how they managed to march without dropping everything, but they did.

Each parade is sponsored by a different group or groups. One day it may be all the mechanics, another day all the grocers, and so on. The length and elaborateness of the parade depends on the wealth of the group. The parade on the last day is sponsored by people from Jocotepec who have moved to the United States. Since it's assumed that they have the most money it's expected that their parade will be the most elaborate. 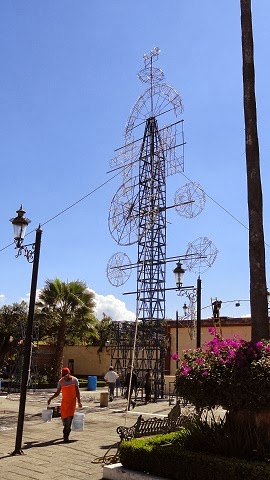 Each day begins with fireworks that start around 5:30. The tower in the picture above is called a castillo, or castle.  It's loaded up with fireworks and they're all set off pretty much at the same time. There were guys climbing all over it attaching the fireworks when we walked by. It's a dangerous display and it's hard to believe there aren't more injuries since there doesn't seem to be any regulation. Fun to watch, but only from a distance. Each parade is also preceded by fireworks. There's a guy at the head of the parade who carries skyrockets in his hand and sets them off to announce the parade is coming. Pretty crazy. 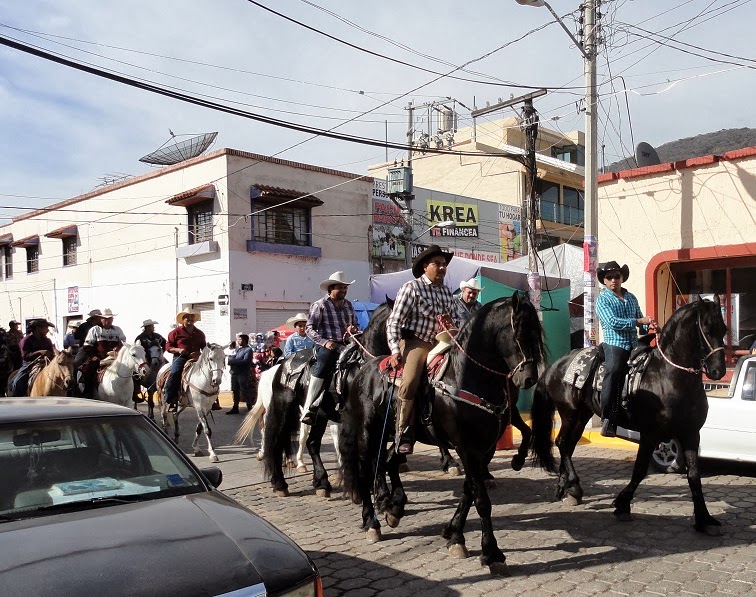 One of the parades we really enjoyed was a Cabalgata (cavalcade). It began with a parade of hundreds of horses through town to the old bull ring where there was a Charro (competition/demonstration). There were some beautiful horses and their riders enjoyed showing off their skills by having their horses dance. 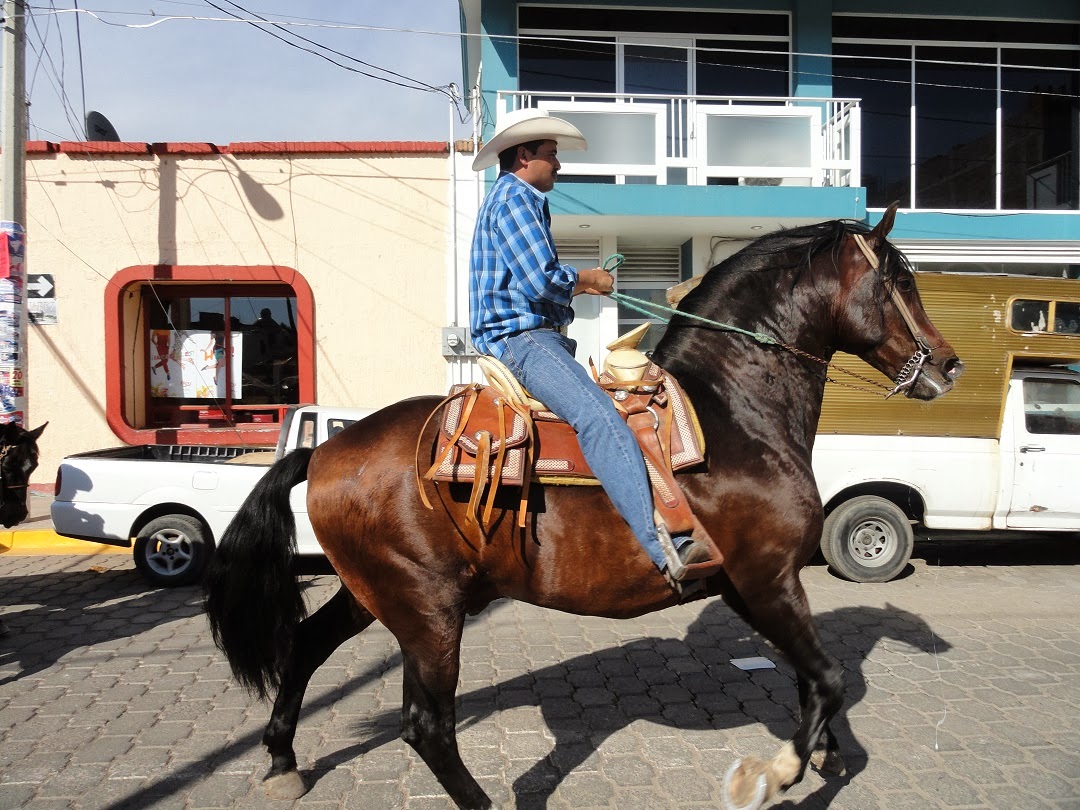 They guy on the right in this picture couldn't seem to get off his cell phone. 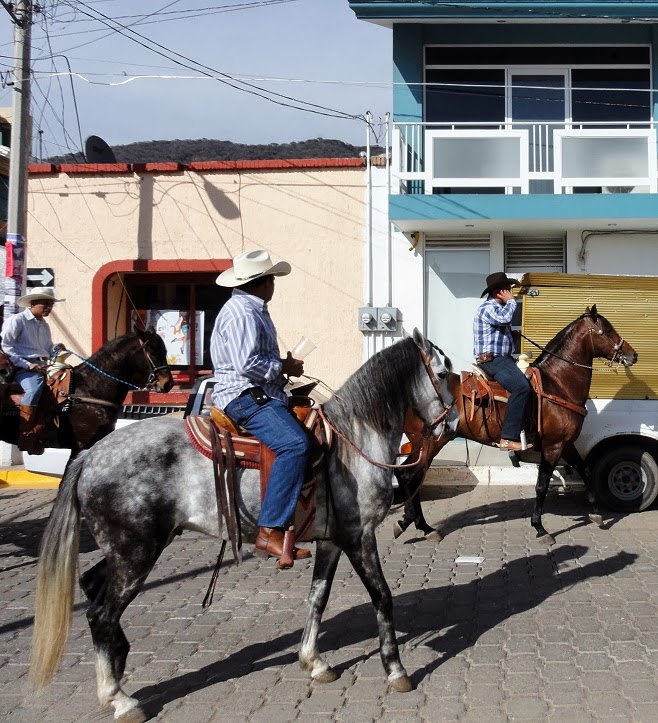 Many of the riders were drinking beer or tequila out of cups. There was even a pick-up truck at the end of the parade with girls mixing drinks for the riders. The guy in the middle of the three men in the back of the picture below didn't bother with any of that - he just drank straight from the bottle and passed it on to his amigos. 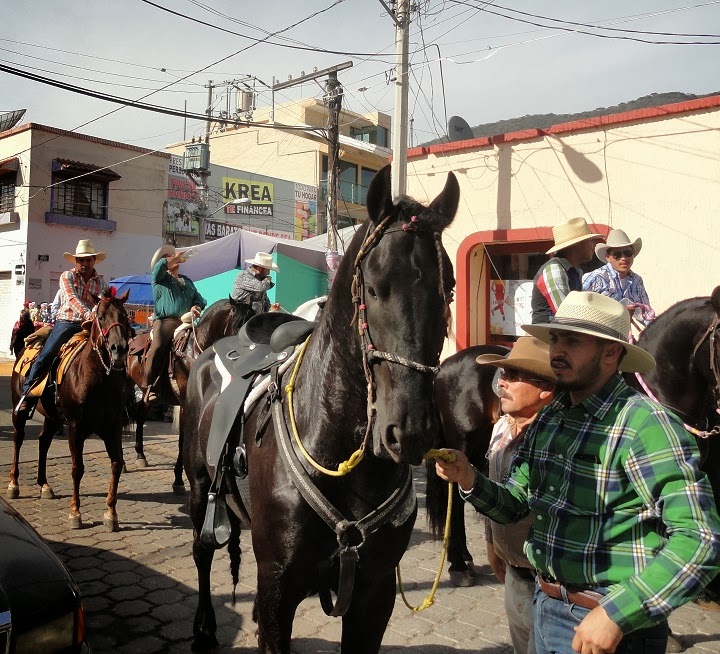 We enjoyed the parades and our time wandering around town looking at all the vendors. This young lady was so adorable I just had to get her picture, with her mom's permission of course. 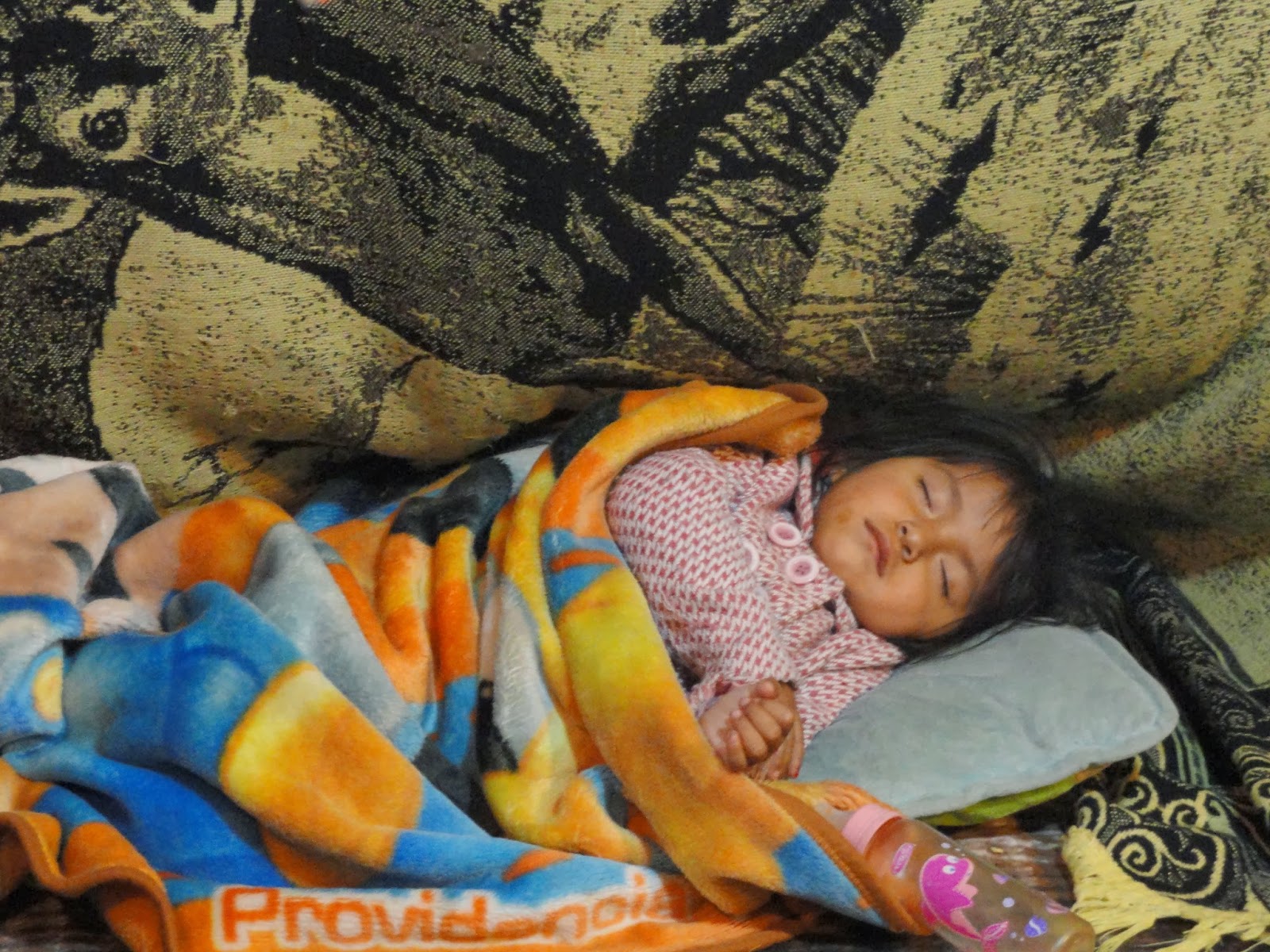 In spite of the fireworks waking us up so early every morning we were happy we went back for the Patronales Fiesta. I'm sure it won't be our last.
Posted by Sue and Brian at 2:33 PM