If you ever get anywhere near the Maritimes – Nova Scotia, New Brunswick, Prince Edward Island, or Newfoundland – we strongly suggest trying to find a way to get to Englishtown on Cape Breton Island for a boat tour to see the birds. Englishtown is about 25 miles from the Sydney Ferry Terminal.

We cannot say enough about Donelda’s Puffin Boat Tours that leave from Englishtown – it was as advertised and more (though her sound system made hearing her talks difficult). We had heard this was a great tour and it was. It took about three hours.

We started to see Bald Eagles before taking to the high seas, mostly sitting on rocks, but only a couple in flight. 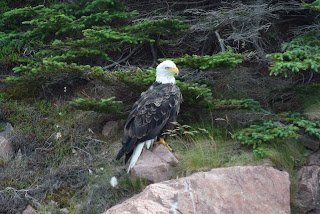 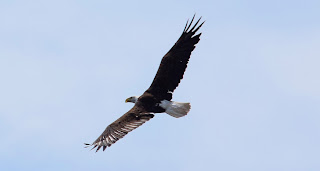 Once we reached the Bird Islands (Hertford first - then Ciboux) we began to see more and more birds. We came for the Puffins and had hopes of seeing them and Bald Eagles. We saw a lot more.

We have often seen Great Blue Herons in various parts of North America but we have always seen them alone – never a pair – never more than one to be seen. 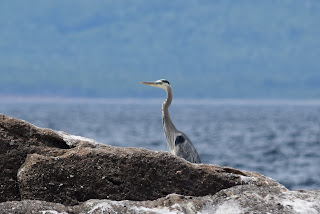 We have wondered how they find mates to breed. We now know at least some of them fly to Bird Islands where they nest in colonies. We saw lots of them and we saw at least one colony nest. 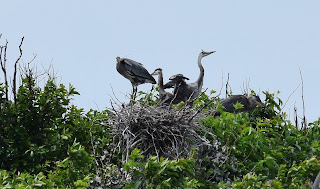 At one point we counted 19 Bald Eagles in one area. Unfortunately they all seemed to be resting and didn't seem to be interested in us, or in flying. We could see the adults and the young. 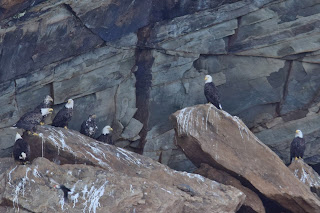 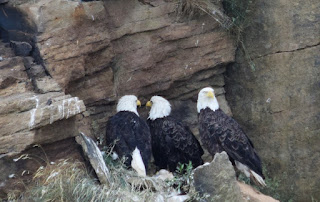 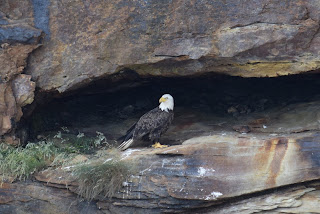 There were many sea birds and Donelda was great at pointing them out and explaining which was which and what to look for to identify the differences. Below is a colony of Razorbills that nest on the rocks. 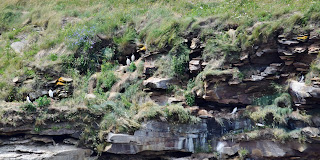 The Razorbills and Puffins were difficult to tell apart from a distance. They nest together in the same type of area. 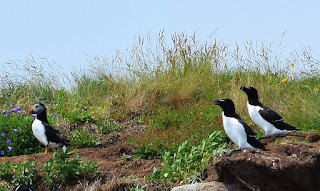 We had seen Northern Gannets diving from several hundred feet up turning themselves into spears and diving down up to 70 feet to catch fish – similar to hawks but Gannets hit the water at amazing speed and keep going down. 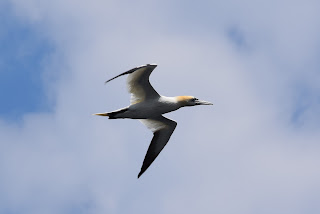 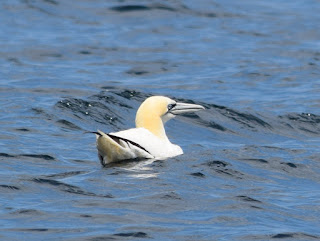 There are many types of seagulls. Below are three Herring Gulls nesting on the rocky cliff with chicks. 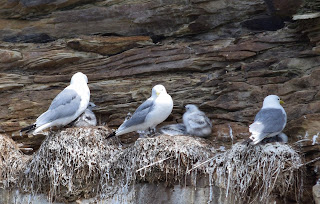 We saw many Black-Backed Herring Gulls. This one is with several chicks. 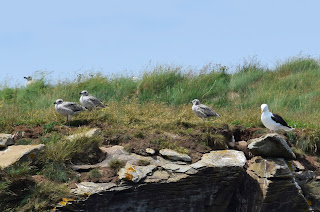 We did get to see Puffins – lots of them. They live at sea and only leave the water to come to the islands to breed. 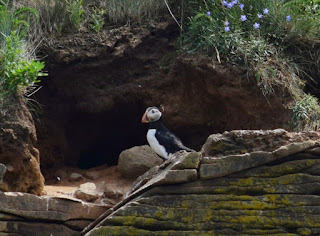 The Puffin's wings beat like those of a hummingbird. The wings beat at the rate of 300 to 400 times per minute, about 5 to 7 times per second. Puffins fly at about 55 mph, hard to photograph easily. 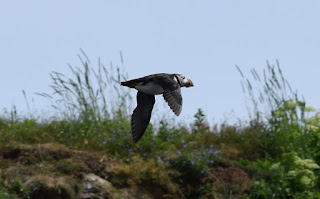 Puffins can dive up to 200 feet below the ocean surface to hunt fish and are very fast. They are rare so it was a real treat to see so many of them in this one area. 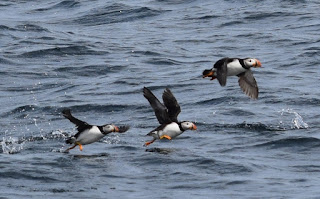 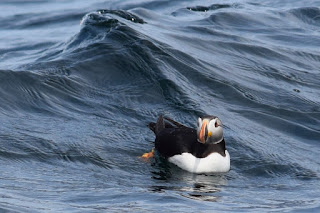 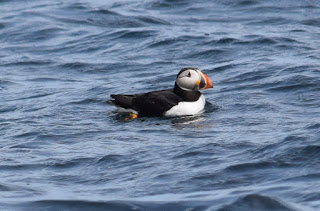 We also saw grey seals swimming around the islands. Because of their size and weight they don't come out of the water - they get overheated if they're on land. 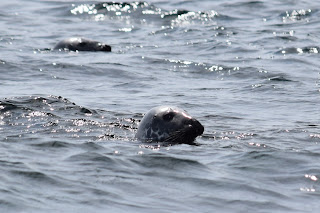 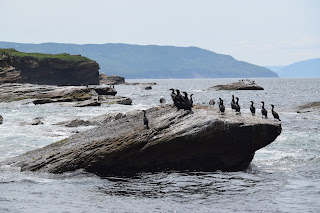 We saw a lot of birds, and there are many that nest here that we didn't see. Following are some links for more information on what we saw...