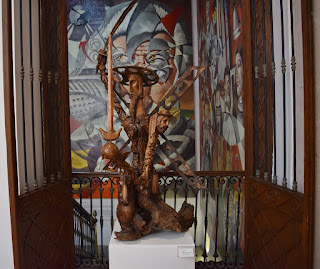 We have always wondered about Guanajuato's fascination with Don Quixote. There are numerous statues around the city and many references to Don Quixote, his faithful companion Sancho Panza, his ideal woman Dulcinea, and his aged horse Rocinante. 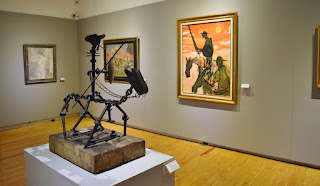 Miguel de Cervantes, author of Don Quixote Man of la Mancha,seems to be the patron saint of the city. The International Cervantes Festival is held there every fall. The origins of the festival are from the mid 20th century, when short plays by Cervantes called Entremeses were performed in the city’s plazas. In 1972, this was expanded with federal support to include more events to add a more international flavor. Since then, the Cervantes Festival has grown to become the most important international artistic and cultural event in Mexico and Latin America, and one of four major events of its type in the world. In addition to the Entremeses which are still performed throughout the city, there are a variety of acts and artists performing from all parts of the world, I'm sure it would be quite an experience to attend the festival.

This year we finally got around to visiting the Don Quixote Iconographic Museum. The exhibits are presented in many different media by different artists in different styles. Paintings, statues, tapestries, even chess sets, clocks and postage stamps all feature Don Quixote and his companion Sancho Panza. 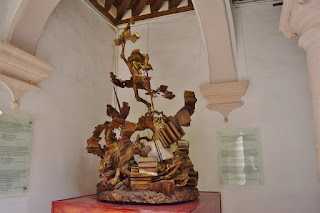 The museum has over 800 pieces scattered throughout 17 rooms and courtyards. A few of them were closed but we saw so much stuff that it's hard to imagine that we missed very much. Some pieces showed Don Quixote and his companions as beaten and battered while others showed him as the chivalrous knight at the beginning of his quest to defend the helpless and destroy the wicked. 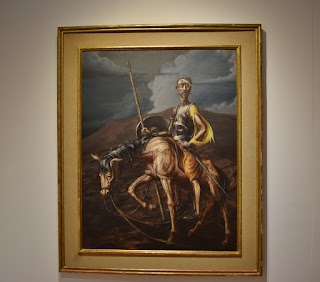 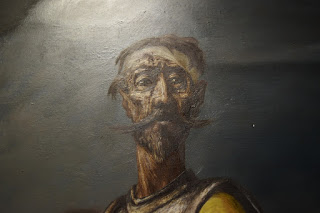 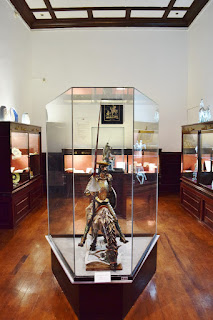 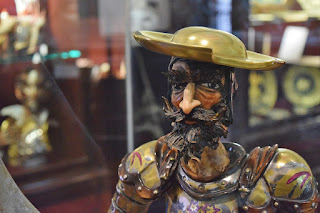 Naturally we wondered why Eulalio Ferrer was so obsessed with Don Quixote that he became the patron of this museum. Ferrer was born in Spain and became a journalist covering the Spanish Civil War. He was on the losing side and imprisoned in a concentration camp. In July 1940 after being released he wrote (rough translation) "When I entered the camp Argelès sur Mer, an exile who lost the Spanish Civil War, a militiaman gave me a book in exchange for a pack of cigarettes; I am wearing one that had been given to cross the border and did not smoke; then I changed it by the book. I got the bag and went to the concentration camp, where there were no seats or anything; I had to sleep on the sand and my pillow was the backpack. The next day, remove the sweater she wore to wrap myself because it was so cold, I saw the book, it was Don Quixote, an edition of Calleja, 1912. Imagine a 19 year old boy reading daily at Don Quijote as one book and an almost religious obsession, because everything idealized." One room of the museum is devoted to various editions of the book that Ferrer has collected, including the one that he read to his fellow inmates in the concentration camp. It's well-worn. 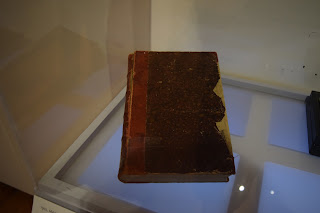 Ferrer also wrote in his diary from the concentration camp La Barcares in 1939 "There are moments when the sands of this beach transform into the plains of La Mancha and I see Don Quixote and Sancho riding along as though theses characters were real. I can touch them, hear them, they are with us. Cervantes created them to be immortal. What great solace I find in reading Don Quixote. Reading this novel in a concentration camp is like a minute hand marking human hours, like the discovery of ideas that justify the madness of this genius to summon the control of reason." After his release from the concentration camp Ferrer was exiled to Mexico.

We found this history of the museum to be not only interesting but touching. The idea that this book helped Ferrer cope with being in a concentration camp gives it a whole new meaning.

As we were leaving the museum we came upon a couple of unique exhibits. The first was a huge, room-sized mural depicting Cervantes and the characters from Don Quixote. 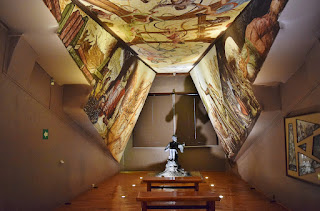 The other exhibit was a carving of Don Quixote. The stone used for the carving was found inside the wall it is now mounted on during the remodeling of the building. 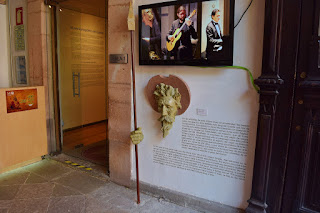 Obviously we enjoyed our visit to this museum. Very fascinating and informative.