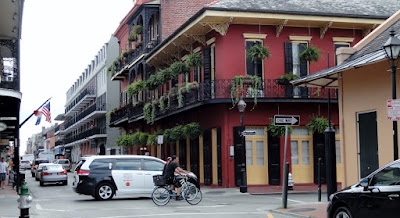 Brian's family had a mini-reunion in New Orleans. His niece Claire has moved there and his nephew Jake, who now lives in Berlin, planned to be there for a visit. It's been a while since we've seen either of them so this was a good opportunity to get together with them as well as his sister Laurel (mother of Claire and Jake), his brother Bruce and our sister-in-law  Eileen. We had a hectic but interesting visit. 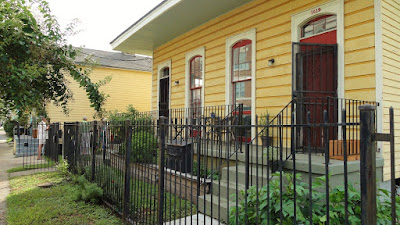 Claire's place is in a neighborhood called Tremé (featured in the HBO series of the same name), close to the French Quarter.  Tremé is not only America's oldest black neighborhood, but was also the site of significant economic, cultural, political, social, and legal events. Free persons of color and eventually those African slaves who obtained, bought, or bargained for their freedom were able to acquire and own property in Tremé. It's an interesting area and we enjoyed the chance to explore a different part of New Orleans. We took a few walks around the area.
As in much of New Orleans (except for the main tourist areas) there are abandoned buildings next to nicely restored homes. 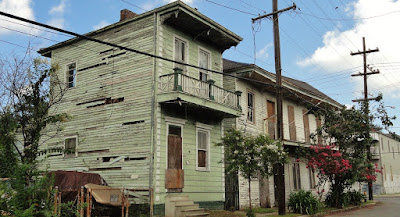 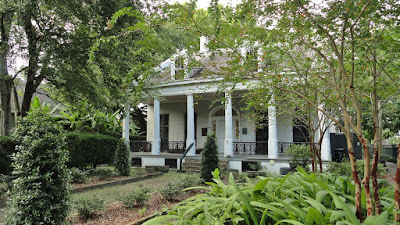 I'm not sure what the term 'Uphill' refers to on this building, but it could stand for many things. 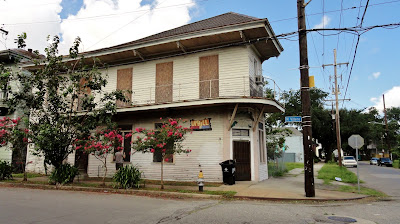 We spent some time at the Ogden Museum of Southern Art which has a varied collection. Particularly touching was the digital archive commemorating the 10th year since Hurricane Katrina hit. There were cards posted that people who had been present for the hurricane filled out. They completed the phrase "What I remember most is..." and many of them brought tears to our eyes. Such a disgrace.
Following that we did something a bit more uplifting when we had lunch at Cafe Reconcile. The cafe is a nonprofit restaurant that serves Southern staples (think catfish, etouffe, jambalaya) cooked by at-risk youth who are receiving job training. It was very special to have good food while supporting a good cause.

Another walk took us to St. Augustine Catholic Church and the Tomb of the Unknown Slave. The crosses, chains and shackles are dedicated to the nameless Africans who met an untimely death in Tremé as well as American Indian slaves who met the same fate. 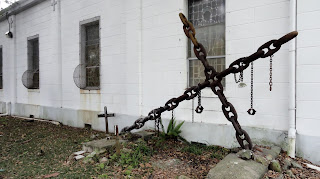 Congo Square was another stop. The statue below commemorates slaves who met on Sundays to dance, sing and drum in authentic West African style. The legacy of this tradition is the foundation of music that it unique to New Orleans, including jazz. 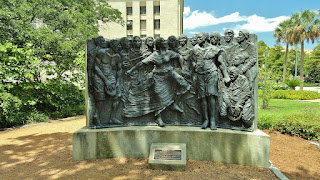 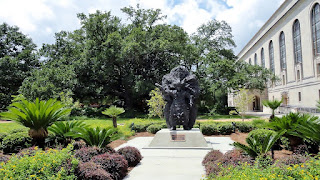 One of the entrances to Congo Park had a great statue in honor of Louis Armstrong and New Orleans musicians. 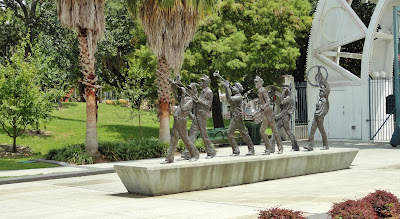 More to come on our New Orleans visit once I get more time to blog......
Posted by Sue and Brian at 3:52 PM