Moving Down the East Coast

Mamaroneck, New York
Brian grew up in Mamaroneck which is in Westchester County. His nephews and niece still live in the area and we spent 4th of July weekend visiting them. His niece Lorraine lives on the water in Norwalk, Connecticut which is just over the border from Westchester County. She invited us to a July 3rd party at her place and it was quite a party, fun to see the fireworks from the water. Also nice to catch up with family. Brian's nephew Bruce and his wife Sara have two boys, Owen and Henry. His niece Lorraine has two daughters, Colleen and Julia.

We spent the 4th of July with Bruce's family at Shore Acres Beach Club, just down the street from Bruce's house. It's in a nice spot on the harbor. 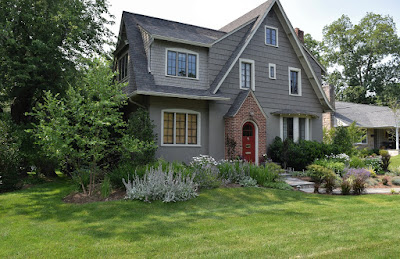 Bruce and Sara now live in Brian's family home, and Owen and Henry make the 5th generation to live there. Pretty unusual in this day and age.
While in Mamaroneck we had to make the customary stops for food at two of our favorite places, Sal's Pizza which has been open for 50 years, and Walter's Hot Dogs which opened in 1919. There's nothing like a slice at Sal's - it has received numerous accolades. Walter's was voted No. 1 in the country by Gourmet magazine in 2001, and their hot dogs have received praise from top outlets. In 2004, The New York Times writer R.W. Apple Jr. highlighted Walter's as "topping the whole list" of noteworthy dogs across the country - more info at http://www.waltershotdogs.com/ We don't normally eat hot dogs but can't pass these up. Yum.

Winchester, Virginia
Denny and Patti are the first people we met when we first started going to Vieques and have been friends ever since. They owned the only dive shop in Vieques at that time, Blue Caribe Dive Center. They ran dive trips, snorkel trips, Bio-bay trips, and rented and sold dive and snorkel gear. At times they even appointed me 'head shop tart' when I went in to help out. Such an honor! When they sold the shop and moved away we really missed them but have managed to visit them every few years, first in Florida and now in Winchester. Visiting them in Winchester is always interesting since they have researched much of the history in the area and share their knowledge with us.
We had a really nice visit, capped off by a trip to a few wineries (oh what a surprise).

Our first stop was at Maggie Malick Wine Caves, which is near Harper's Ferry. The caves were built into the hillside.

Our second stop was at Two Twisted Posts winery. Good wine and interesting people to talk with.

They even had a cockatoo perched in the corner, which we all thought was a stuffed bird until it began to move. 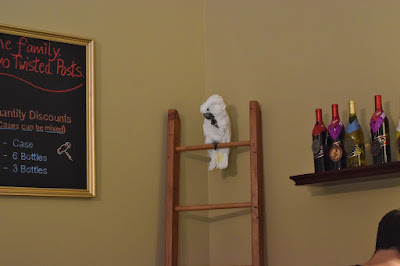 We had a great visit, lots of good conversation, good food and good wine. Thanks Patti and Denny!