Crazy to be heading south this time of year but we want to visit with family and friends in Florida and that's the way things have worked out. It's put a bit of a cramp in sightseeing plans since the heat index in several places has been well above 100, but we've done what we can and stopped in a few of our favorite cities. 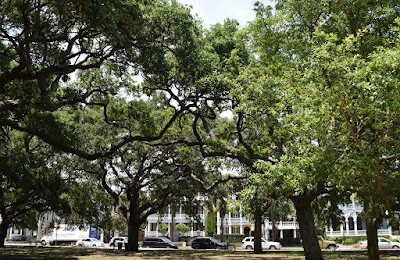 Charleston is a unique city. We love the huge live oak trees, stately homes and mansions, and the history. I thought I would share some of the pictures we took while wandering around the historic part of town. Hopefully they will give some sense of the charm of Charleston.

The high battery walk follows the Cooper River and is a great vantage point from which to view some of the historic mansions. Many of the homes are open for tours but we didn't take one. These homes had prime views of the shelling of Fort Sumter at the beginning of the Civil War. 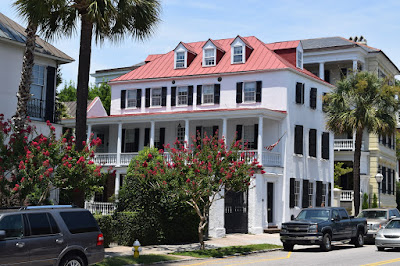 Charleston is known for what are called 'single houses.' These houses have an entrance on the street leading to a porch running along the side of the house where people would be able to sit and enjoy the breezes. The actual entrance to the house would be on the side porch. We saw several examples as we walked around the historic district. 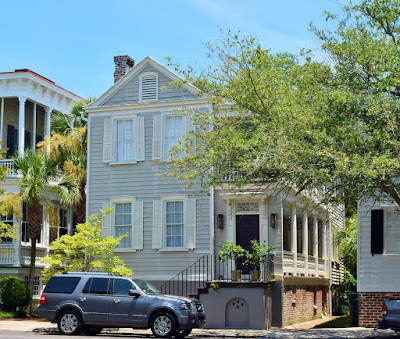 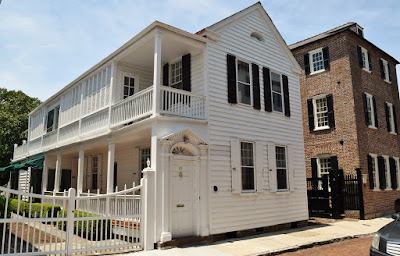 We saw a beautiful houses as we walked in the area behind the water - many of them had signs explaining their history. The old hitching posts have been preserved in the area in front of these homes. 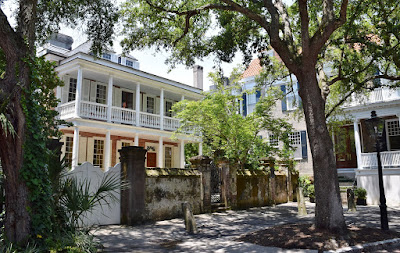 This house looks as though nothing has been done to preserve it, but I think it's been cared for and the look it has now is intentional. 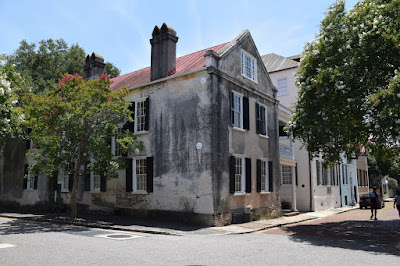 There is a lovely park called White Point Gardens which is also know as Battery Park (I'm guessing it's named that because of the Fort Sumter barrage). It's on the Charleston peninsula where the Ashley and Cooper Rivers meet. We parked there to begin our walk in the historic homes area and then came back and walked around the park.  There are huge live oak trees 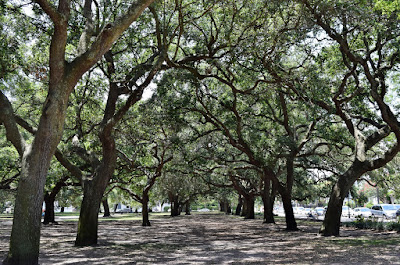 and some interesting statues. 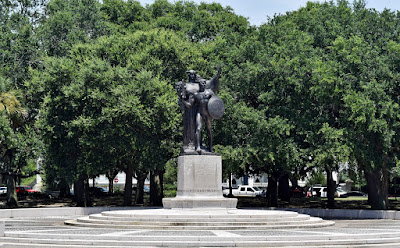 There was a sign in the park explaining that the park was a nesting area for herons, and it asked people to honor that and leave them alone. We saw this juvenile heron that didn't appear to be able to fly yet, and looked quite confused. 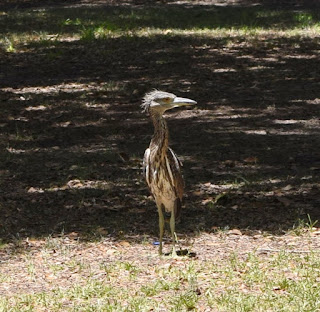 In a mix of the new and the old, we saw this woman paddleboarding past the mansions with her dog keeping her company.

It's a great city, well worth a visit. It was ranked the top number one top city in the U.S. and Canada to visit by Travel and Leisure magazine, 2015 World's Best Awards, and number 2 best city in the world Conde Nast Traveler 2014. So much to see and do, wish the weather had been better for us but we'll probably be back.

A few years ago we took a Trolley Tour around Savannah and enjoyed it thoroughly. This year we decided to explore on our own. There are a series of squares, or small parks, throughout the historic area. We began in Johnson Square which has a 50 foot tall marble obelisk. It's a monument to Nathanael Greene, who was second only to George Washington during the Revolutionary War. Greene was awarded Mulberry Grove Plantation near Savannah by the grateful state of Georgia and he moved there with his family after the war. He died a short time later of heat stroke (there's a warning for the heat and humidity in the area). His remains were moved to the base of the monument in 1902. 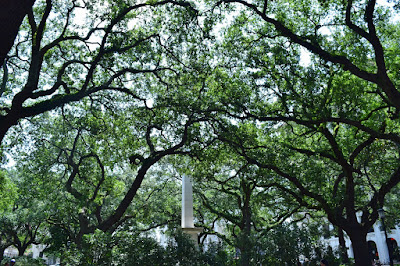 As we continued to walk through Johnson Square we came to Christ Church, an impressive historical building. 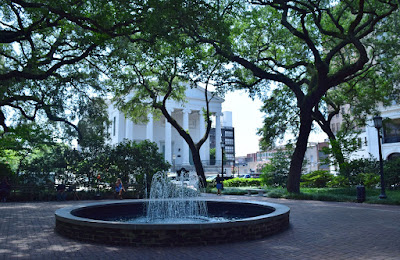 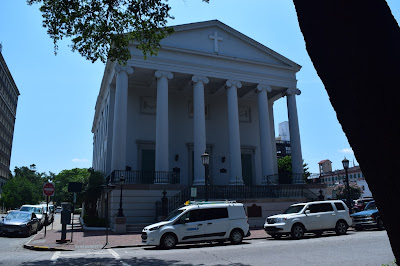 As with many of the places in Savannah, there was a nearby plaque with information about the history of the building. 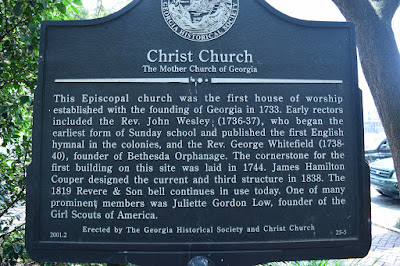 We continued around the square and had a beautiful view of Savannah City Hall, another impressive building. 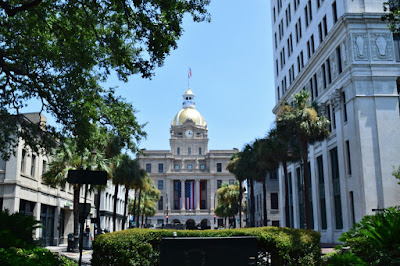 Once again we found a plaque with historical information. 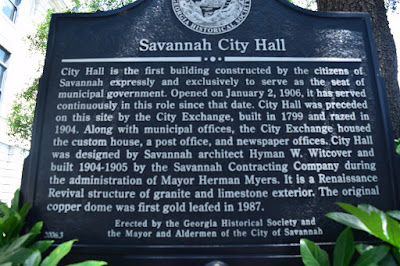 The City Hall building is adjacent to the old Cotton Exchange which has been restored and now houses shops and offices. The Savannah River flows behind these buildings and is reached by going down stairs that are located here and there, or an elevator next to City Hall. The riverfront is an interesting area. The last time we were there we saw some huge ships going up and down the river but this time we saw mostly tour boats or water taxis. 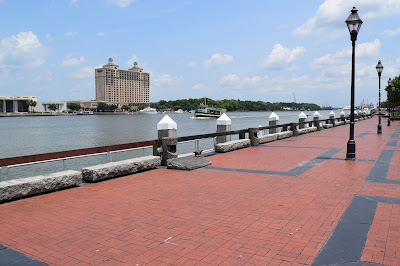 The original buildings are still on the riverfront. Some have been restored and some haven't. It's a busy tourist area. 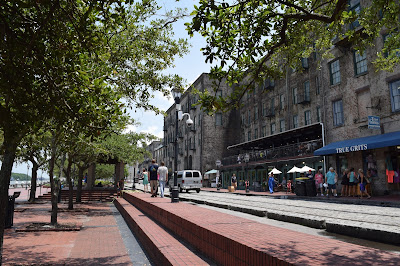 We had a nice lunch and then decided just to sit a while and watch the boats and people go by. 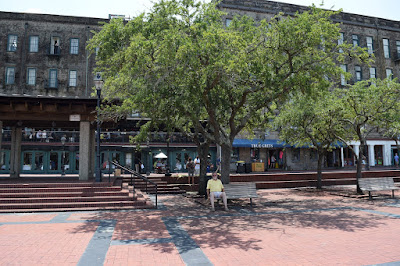 There were some local crafts people and musicians along the riverwalk. 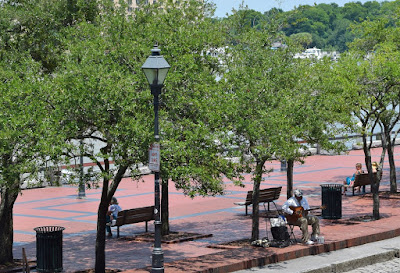 Once again it was a nice place to spend some time, but the heat and humidity limited our exploring.

Maps with stops along the way