We continue our slow journey south along the California coast. From Atascadero to our next stop in San Luis Obispo (SLO) was only 21 miles. SLO is home to Cal-Tech and like many college towns has a lot of energy. While wandering around town one day we found ourselves at the Brews and Brats Festival. Lots of people and music. One of our favorites were the Bucket Busters. The kids perform throughout the Central Coast, collecting donations that go towards scholarhips for children who otherwise wouldn't have the money to take music lessons. They're really quite good and it was amazing to see how young some of them are. More info and some video of their performances can be found at http://www.musicmotive.com/bucket-busters/  It's worth checking out.

As with most of the towns where we stopped it was a short drive to the coast. We spent a day in Avila Beach, which is a nice resort town on a beautiful sheltered bay.

The bay is home to a variety of birds and mammals. I don't know if these pelicans remind me of the three wise men or just three wise guys. 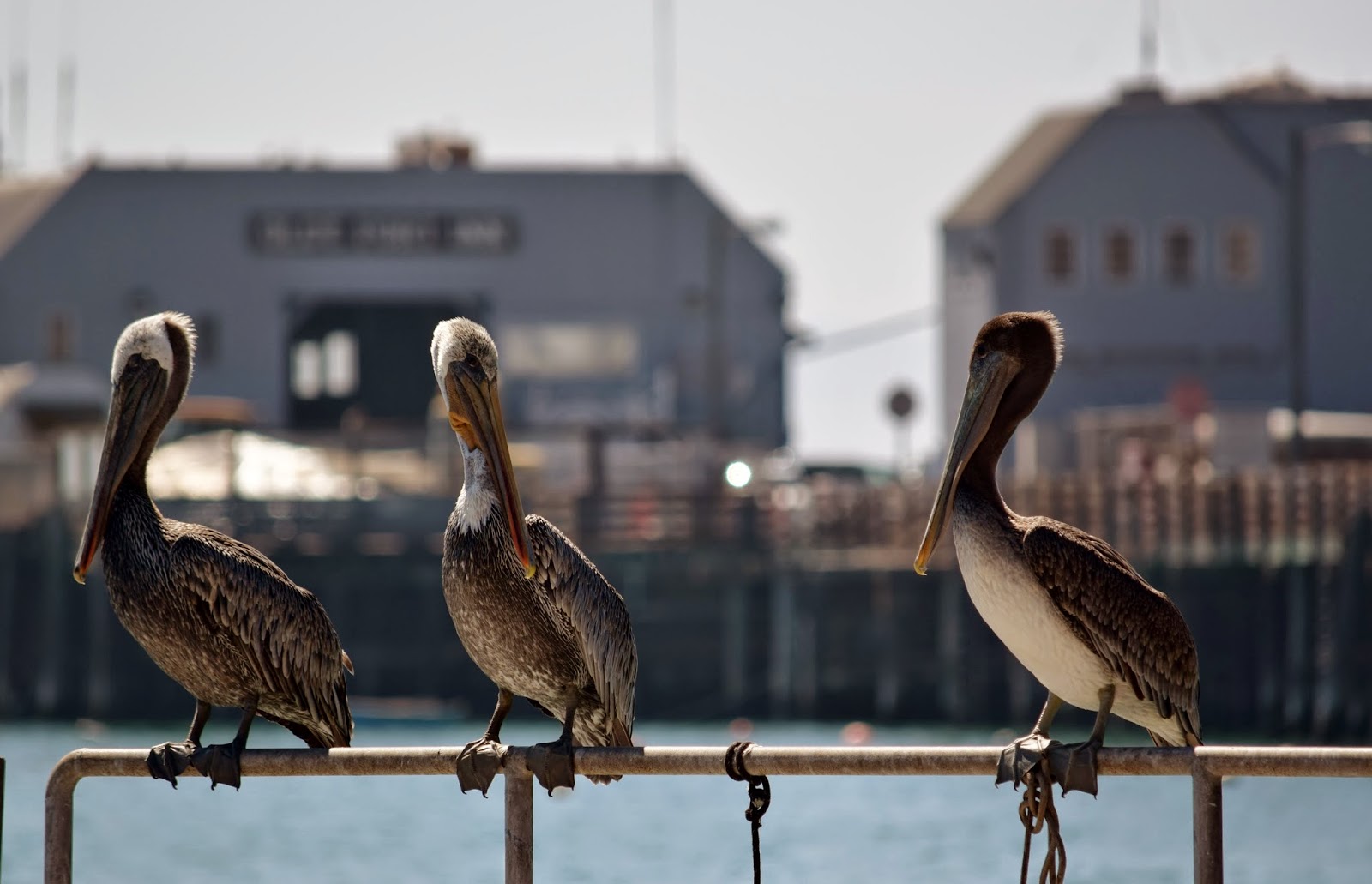 Same with these three sea lions. 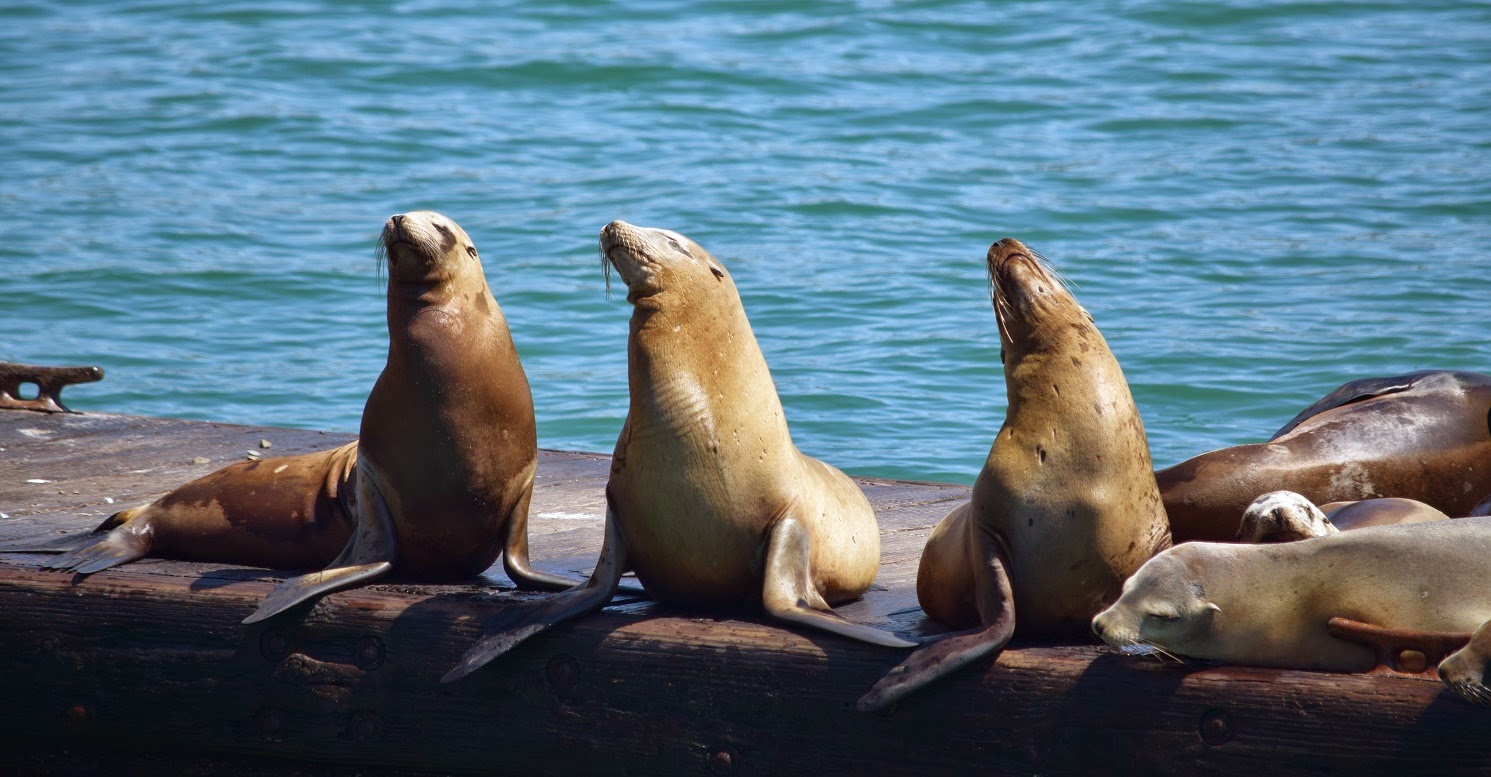 As we saw in San Francisco and have seen many places along the coast, sea lions have a tendency to take over an area. Once established, they can't be moved. 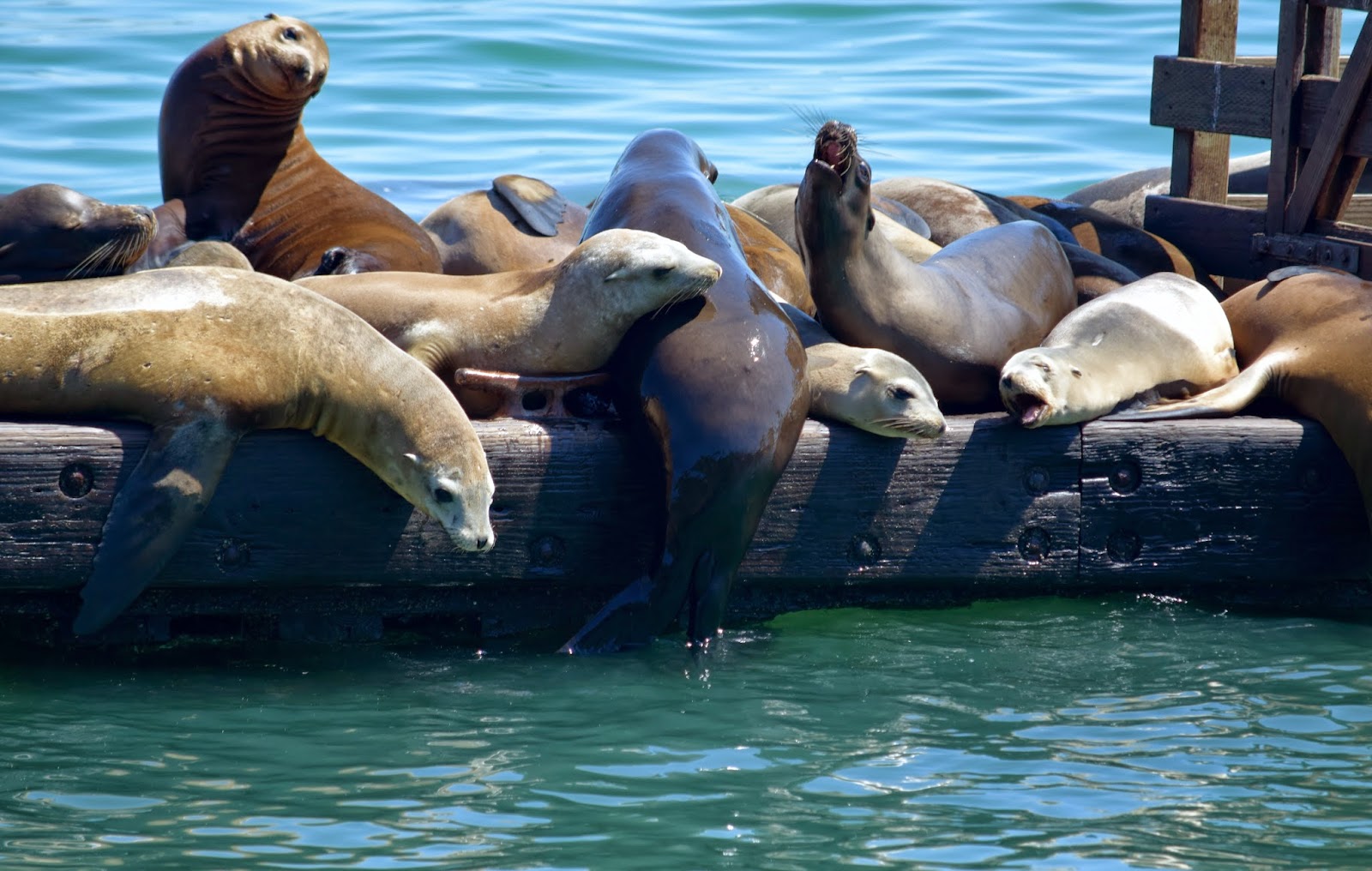 We thought this sea gull was pretty funny, looking like it was trying to decipher the smoking policy. 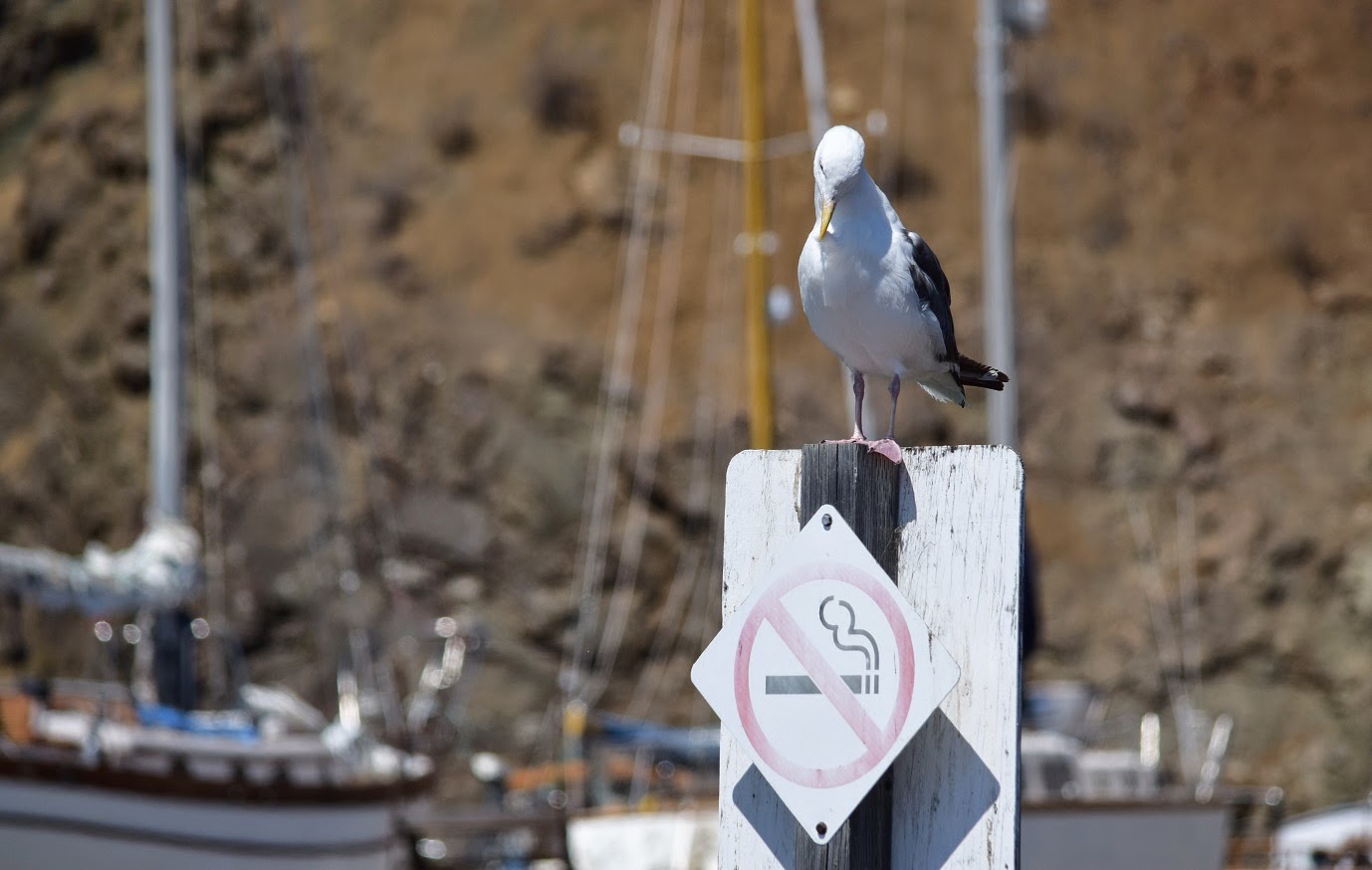 The coastal towns of Pismo Beach and Morro Bay are also a short drive from SLO. The Morro Bay rock can be seen for miles and is quite distinctive.

SLO is close to the Edna Valley, another well-known wine region. 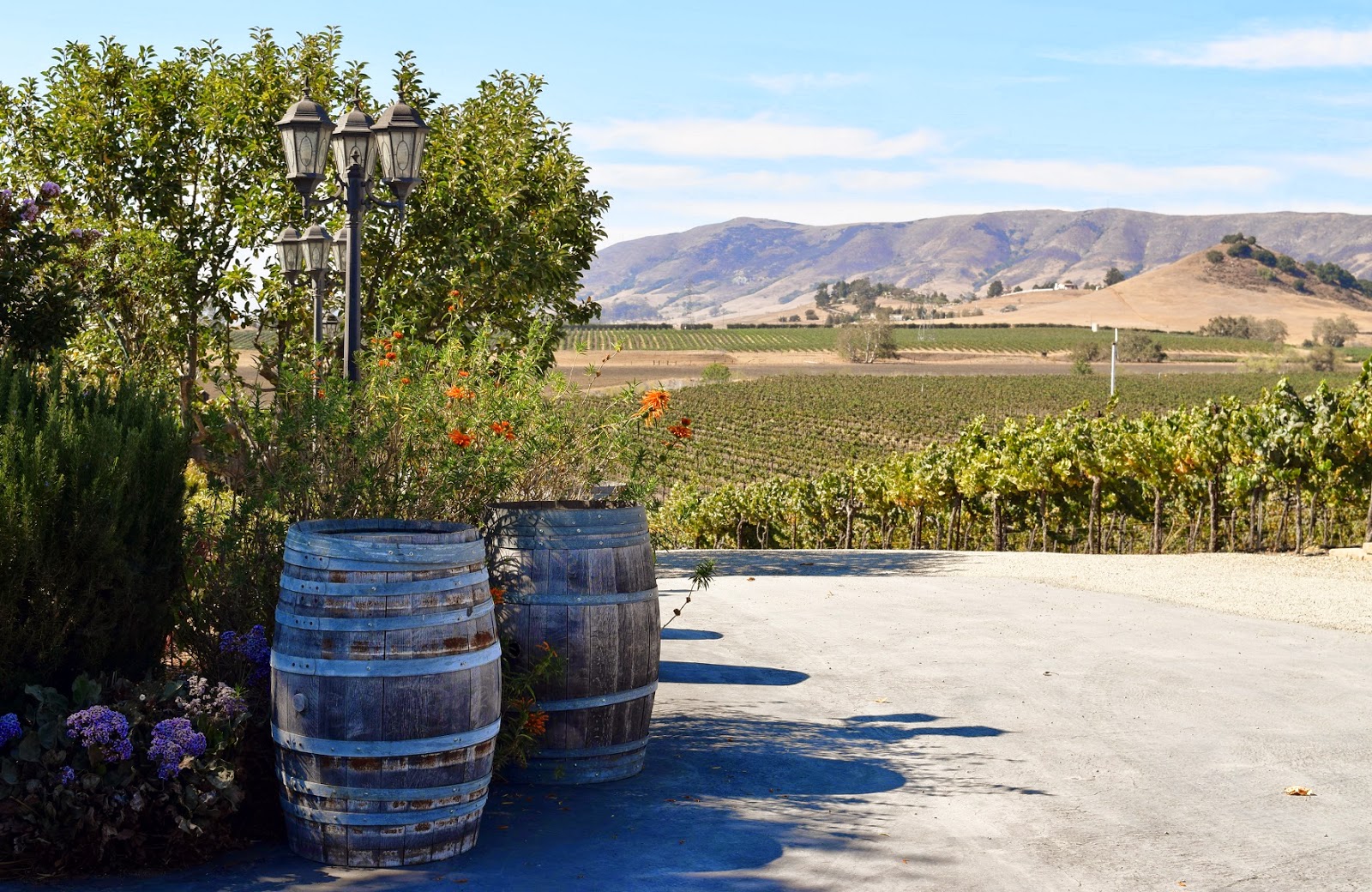 Of course we had to do a bit of wine tasting. At Wolff Vineyards, which produces some well-regarded wines, Tilly joined us in the tasting room. As usual she seemed to be a bit bored with the whole thing. 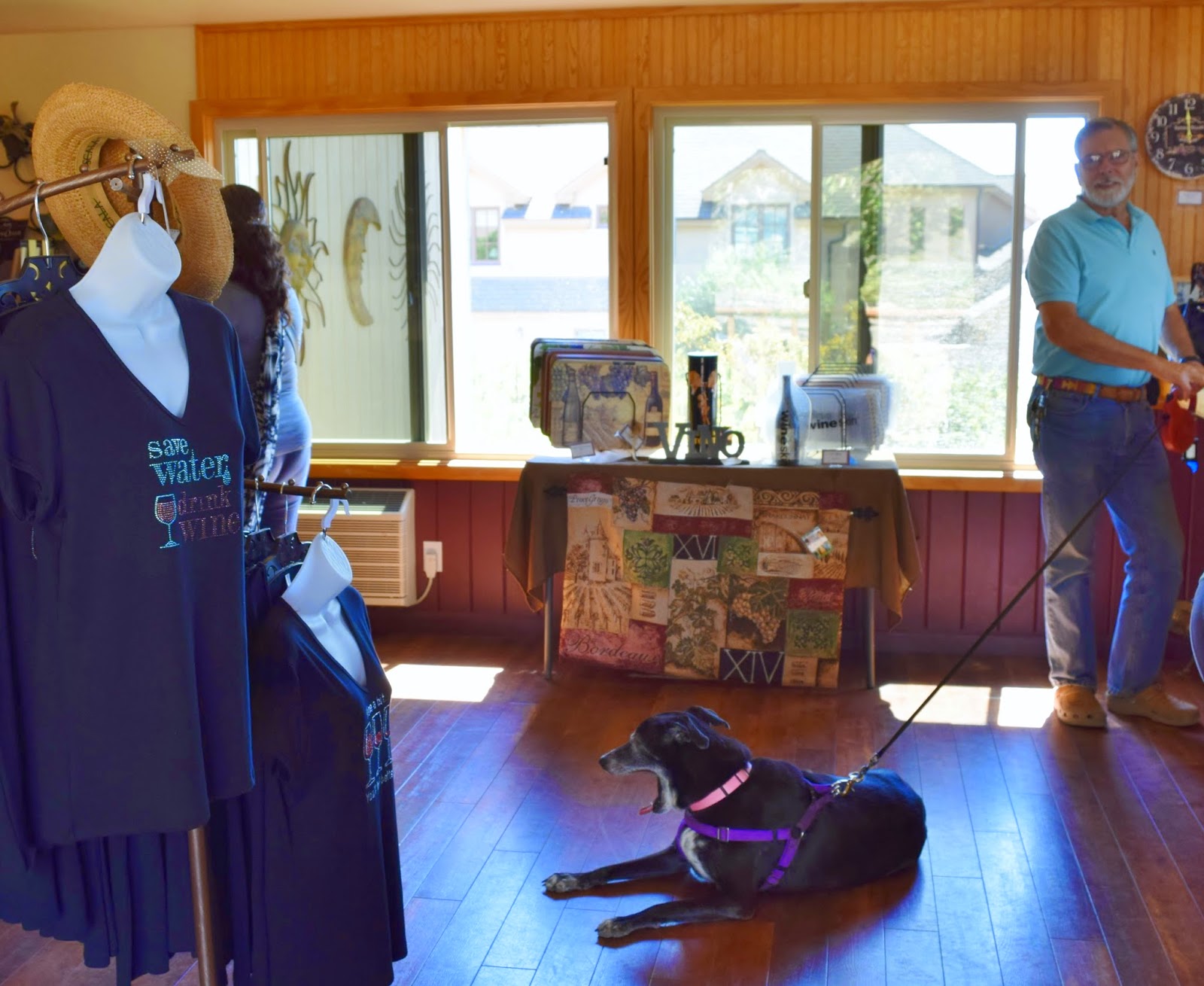 From SLO we drove to Lompoc, about 60 miles south. I didn't take pictures there, getting lazy I guess. Several years ago we saw the shuttle as it flew by Vandenberg Air Force Base near Lompoc on the way to its permanent home in LA. 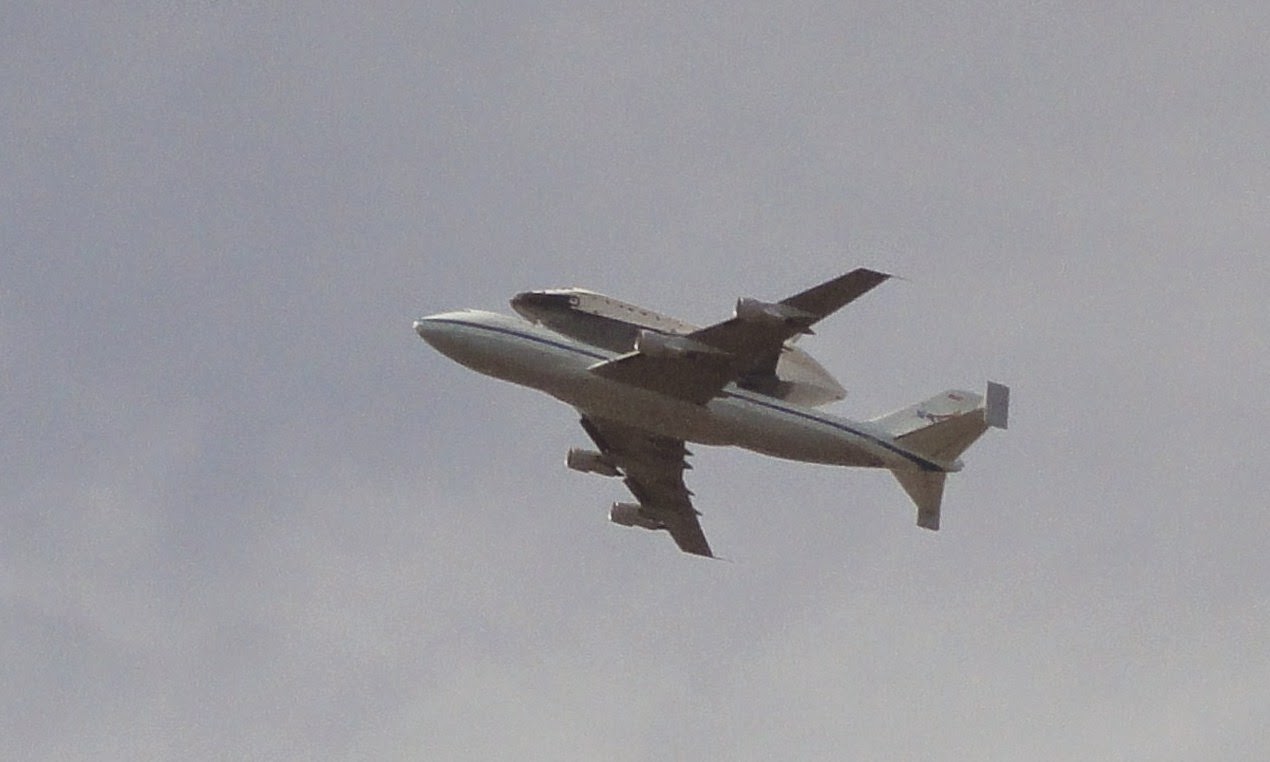 From Lompoc we went to Lake Cachuma, another short drive of 32 miles.

The effects of the severe drought can be seen at Lake Cachuma as well as so many other places in California. In the picture above, all of the green/brown area in the foreground was part of the lake. If you look closely, you can see the square white blocks in the grass that were anchors for boat buoys. 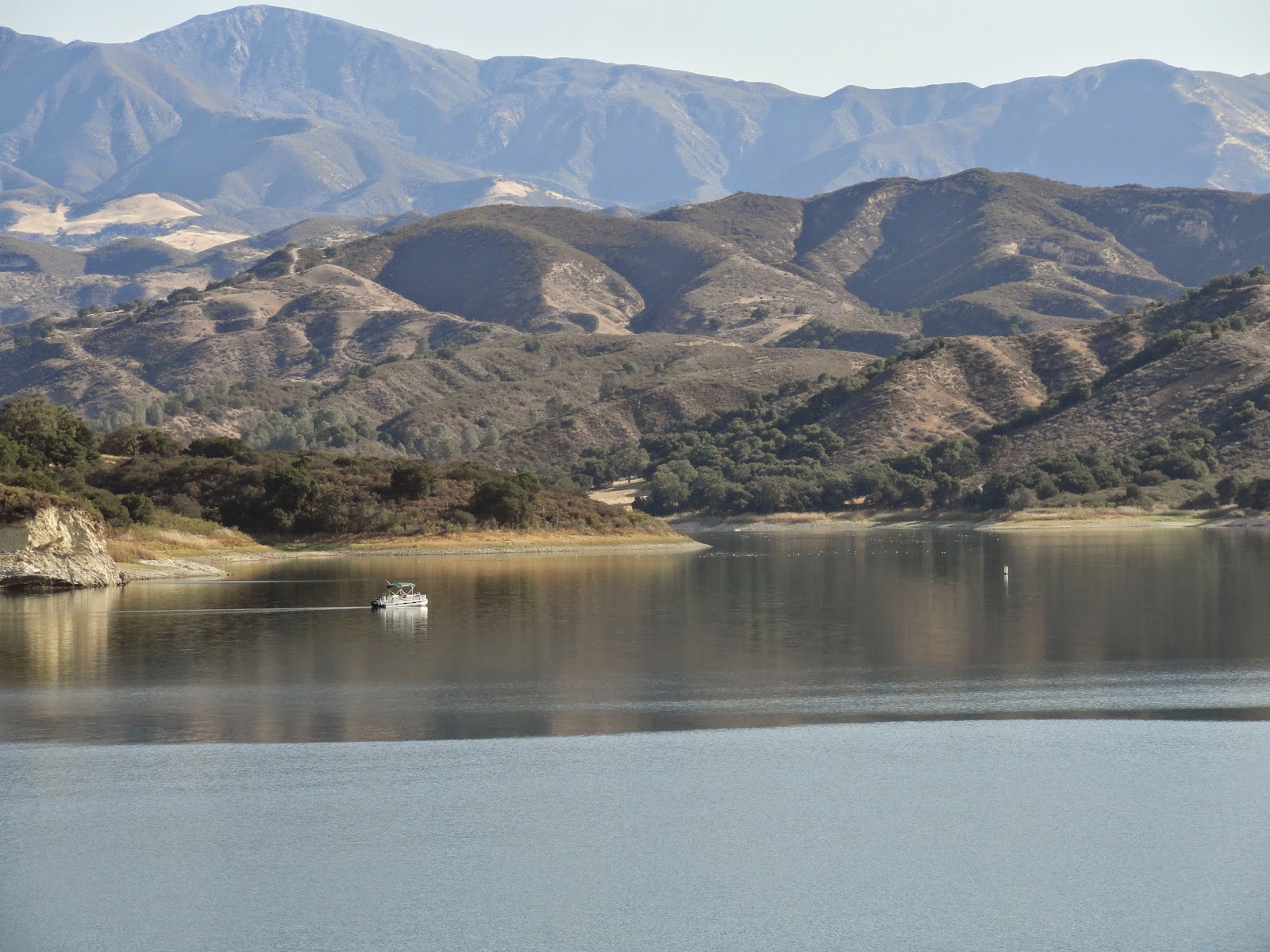 Pretty much the same area, 2014. The water would be above the white rock formation on the right. 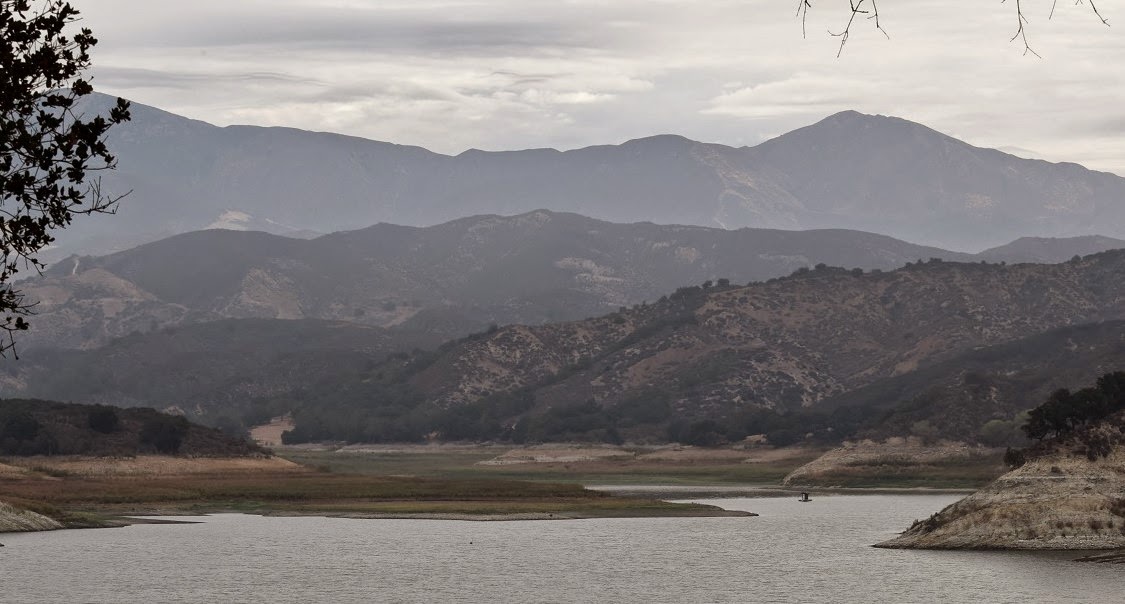 Our next stop was Santa Barbara, about 20 miles from Lake Cachuma. Great town. The main drag is State Street. 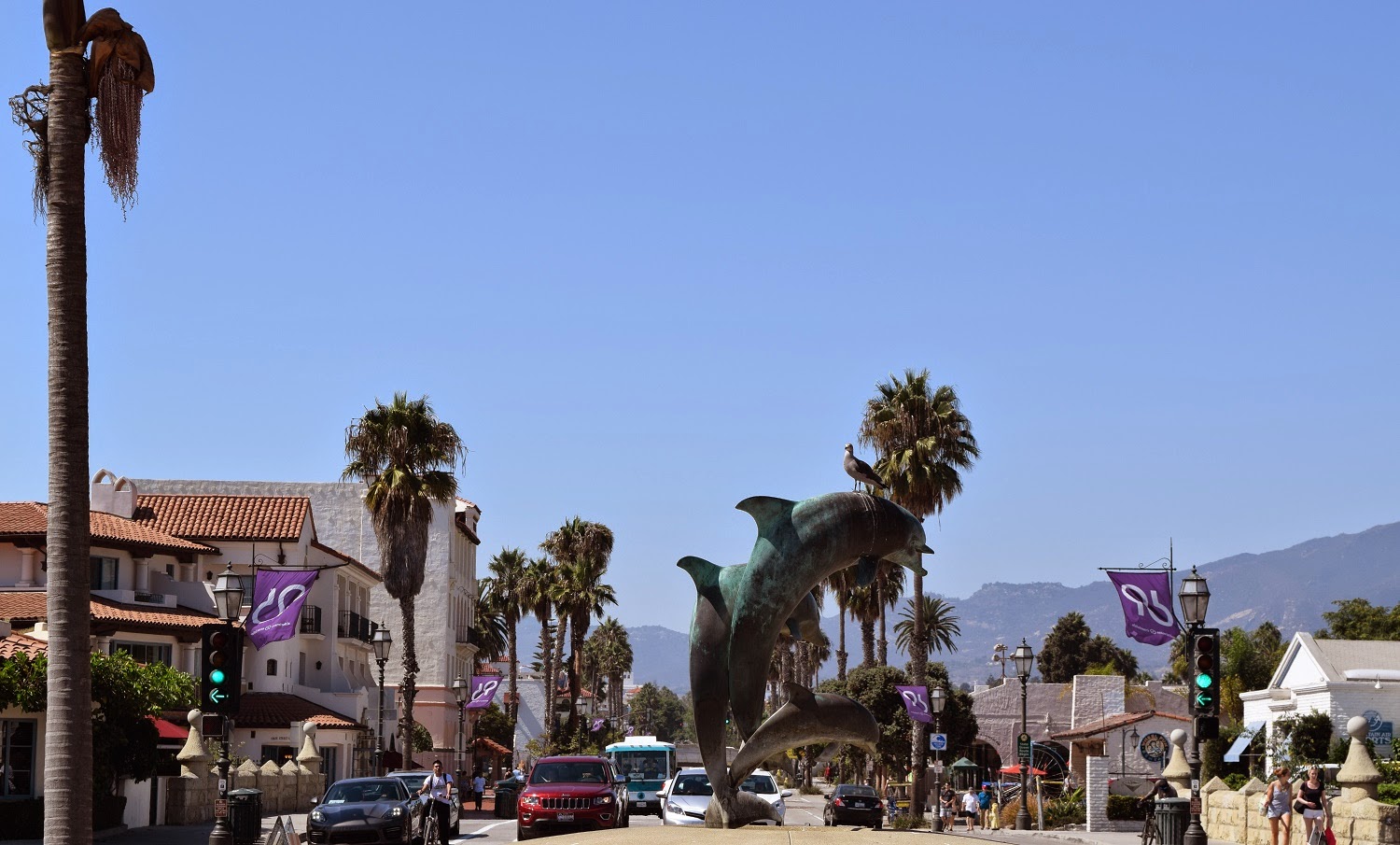 One of our favorite dog beaches is in Santa Barbara. It's called Hendry's Beach or Arroyo Burro. 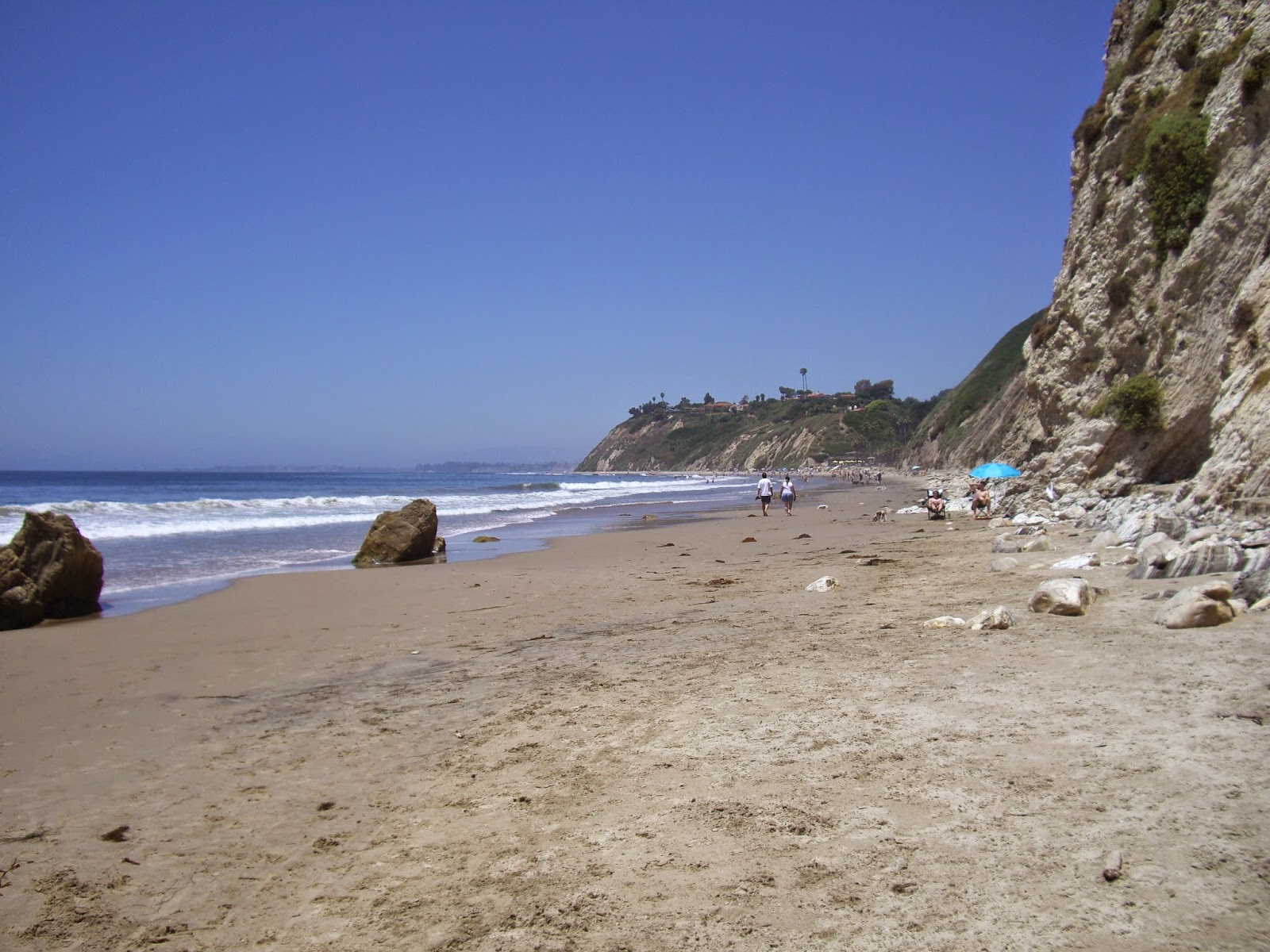 Tilly had a great time running around, meeting the other dogs and trying to keep up with them. We love seeing her so happy. A great thing about Hendry's is the dog wash in the parking lot. There's a secure tub, warm water from a gentle nozzle, shampoo, conditioner and a blow dryer. Not cheap but worth it to put a nice clean dog in the car.

From Santa Barbara, on to San Diego.