Our first stop after leaving Fountain Hills was De Anza Trails RV Park in Amado, Arizona. It's about 20 miles north of Nogales and a good place to overnight before crossing into Mexico.
We got an early start and were just waved through customs. We then stopped for our tourist forms and car permits. That took less than an hour and we were on our way.

Each year as we travel throughout Mexico we continue to see improvements in the road system. From Nogales south we drove through many construction zones where work is being done on the roads. In some cases they just put tar on the road and then loose gravel on top while in other areas they put down a new layer of "asfalta". But in many areas they have been completely removing the old road and building a new and wider road in its place with new roadbase and new layers of "asfalta". Yes, there is still a lot of bumpy, narrow road - but not as much as there once was.

We made the 290 miles to our first stop, San Carlos, that afternoon. It was even early enough for us to unhook the car and drive over to the Telcel office in Guaymas to get our phone and air card activated. We accomplished a lot in one day, even treating ourselves to a nice shrimp dinner. 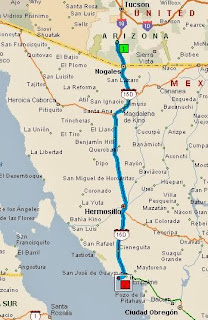 Our next overnight was just south of Los Mochis where we boondocked in the back of a Pemex station, about 240 miles.
On this stretch we noted new concrete road all the way from Ciudad Obregon to Navojoa. 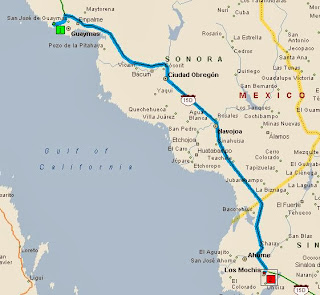 We had stayed at this Pemex station before and found it to be a good place to stop since it's about halfway between San Carlos and Mazatlan. There's a gated lot with a security guard - no charge, we just tip the guard. Once we pulled into the lot we saw another motorhome, the only other RV we've seen headed south. They were gone by the time we got up so they didn't get in the picture I took of our spot among the trucks.

From Los Mochis it was 256 miles to Mazatlan, our next stop. 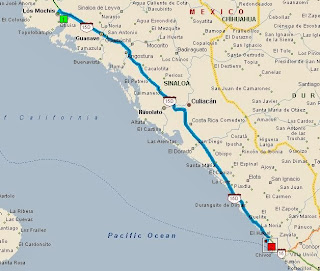 There is a whole new section of road west of Culiacan where they have put in a diagonal road in place of the old dog leg jog. Using our "Trace GPS Route" in Microsoft Streets & Trips we are able to show the actual route we took instead of the old road still shown on the map. Our Garmin does show the new road but Streets & Trips does not show it yet. The thinner blue line on this map shows the new road. 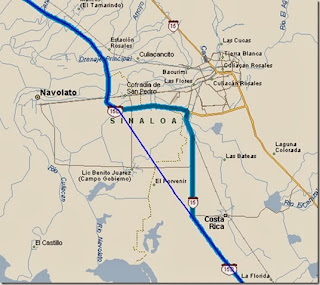 We decided to stay at Punta Cerritos RV Park which is just north of the city and the closest RV park to get back onto our route south. The park is mostly private but has a few transient spaces. Many of the residents are building palapas, very similar to what we saw at Paamul in the Yucatan. They have brick walls, outdoor kitchens, gardens and so on. Many of them don't look like they're ever leaving. 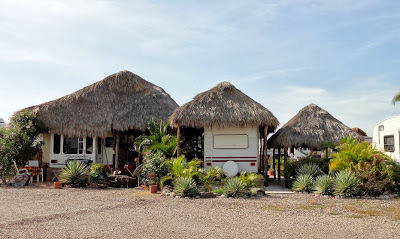 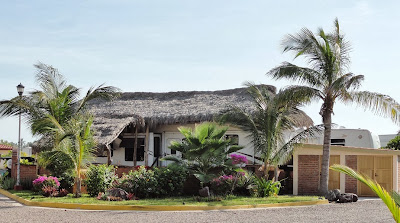 We're spending 2 nights here, getting caught up on a few things before we move on. Our next destination is Lo de Marcos, which is north of Puerta Vallarta. It's a popular beach destination with RVers, so we thought we would check it out. Our route tomorrow is about 237 miles. 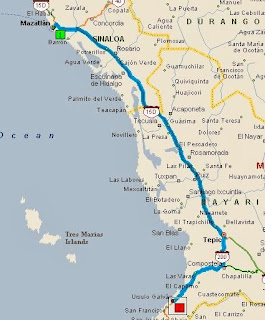