By the Shores of Lake Chapala

We're happy to be back at Roca Azul Resort on Lake Chapala near the town of Jocotepec. The Bus is parked in a nice spot with the lake at our backs. While in bed in the morning I can look out my window and watch the sunrise. Nice. Here's a link to Roca Azul   http://www.roca-azul.com/

One incident of note along our drive from Lo de Marcos is that the odometer on the Bus hit 100,000 miles. The really great part of this milestone is that when the odometer turned over we were traveling through fields of agave and passing by the town of Tequila. Seriously, what an appropriate place for that to happen and what a great coincidence! Couldn't have planned it better.

We really enjoy staying at Roca Azul. The resort is quite large and has a thermal pool, large swimming pool, tennis courts, a huge soccer field, and nice areas to walk. It's showing its age a bit but it's still a nice place to spend a few weeks.

The area of Roca where we're parked has several year round residents as well as seasonal residents. We've been here enough times that we've gotten to know people here and enjoy connecting with them once again. It's pretty low-key, which we like, and we find plenty to keep us occupied.
Our friends Kris and Ken had some problems with their truck this year and we were able to bring some parts down for them. Ken had things moving along well and plenty of support if he needed it. He plays the blues harp and sings, and has played at clubs in the States, some of which we've been to. He treated us to a concert one night. Wonderful to hear some live music. 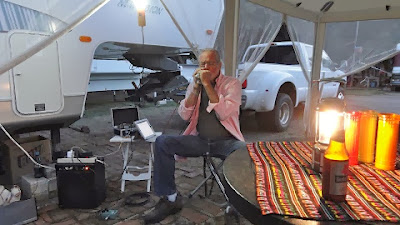 Our good friend Micky lives in the town of Ajijic, which is on the northwest shore of the lake. I've known Micky since the Colorado days when we were both still working and living there. She's been in Ajijic for eleven years, teaching and working with speech/language issues in her private practice. We always have lots of laughs and fun getting caught up with things. This year was no exception - the picture below was taken at a restaurant in Chapala. 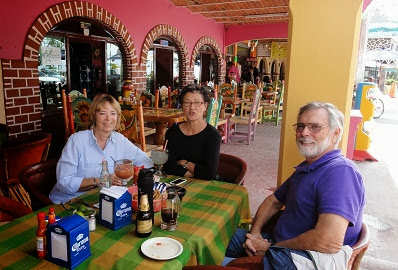 While sitting at our table along the malecon I got a picture of the mariachis tuning up and getting ready to perform. 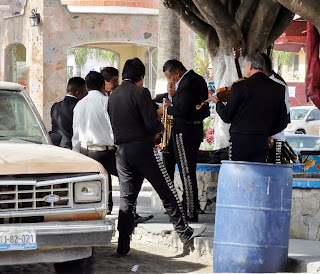 There has been a great deal of controversy regarding the water in Lake Chapala. It's the main source of water for the city of Guadalajara. As I understand it, there are now 2 pipelines that take water from the lake and there is a movement to add another one. The people around the lake are understandably concerned. We've seen the level of water drop drastically over the last few years. In the picture below the water used to go all the way out and along the pier in the distance. Now it's gone. 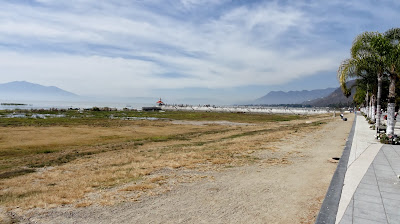 Fortunately the white pelicans continue to come here. There are still large flocks of them as well as many other water birds. 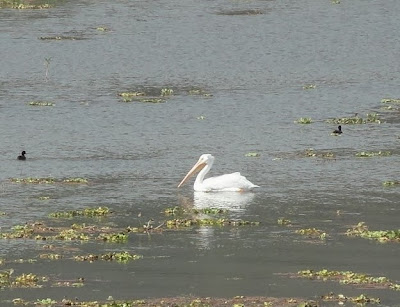 Our RV friends Rick and Ruth stopped at Roca for a few nights while they were on their way to Lo de Marcos. We were delighted to give them the quick tour of the area, including the malecon in Jocotepec.

We also took them into Ajijic and Chapala. Ajijic has a lovely centro area and is a very artistic community. I took this picture at the Cultural Center. It is one of the many murals seen throughout town. 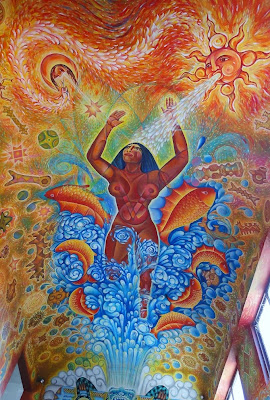 This mural is on one of the buildings around the plaza. 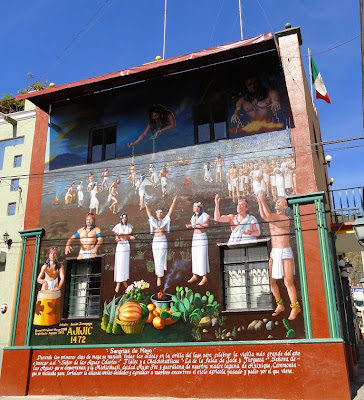 The murals are very colorful and representative of various events.

The following map shows the Guadalajara area and Lake Chapala. For perspective, Lake Chapala is about 50 miles long, and 10 miles wide.
The green number 1 on the map is Roca Azul, a few kilometers south of Jocotepec.
The yellow number 2 is Tlaquepaque, a suburb of Guadalajara. It's an upscale artsy area with many galleries and shops. We plan to make a day trip there. Just to the east of Tlaquepaque is Tonala, where most of the Mexican crafts are actually made. We have been there several times but haven't been back to Tlaquepaque for several years so that's where we'll go this year.
The red number 3 is Hacienda Contreras in Valle de Juarez, our next destination. We'll be there for the holidays and will probably stay several weeks. 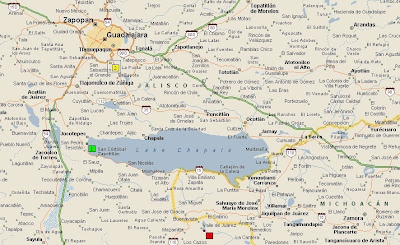 The map below shows the towns of Jocotepec, Ajijic and Chapala. 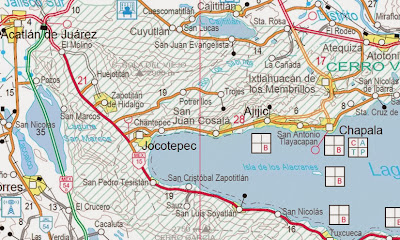