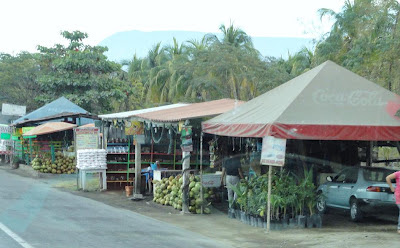 This post is out of order since it's actually from our time in Melaque. Brian is doing a bit of catching up.
When we went down by the coast near Manzanillo we saw miles and miles of coconut palms. There were countless stands along the road selling coconuts by the ton. We have never seen so many coconuts.On our last day in the area, from our RV spot near Barra de Navidad, we saw how they harvest coconuts. This is nuts.
A guy just about runs up the tree - about as fast as I can walk anyway. He has some sort of spikes attached to his feet. No safety belt or anything other than his hands to hold on. Following is a distance shot and then the same photo zoomed in for a better look. 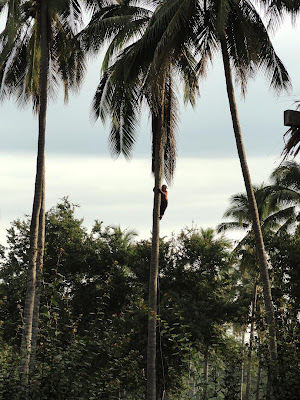 He then climbs into the fronds where he straddles and sits on one. 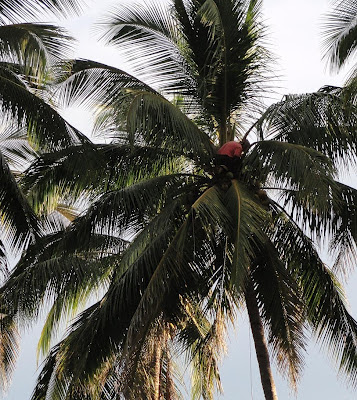 He has a very long rope - long enough that both ends can reach the ground - which he now hangs over a branch. My rough guess is that he is about 100 feet off the ground. At the end of the rope is some sort of hook thing which he attaches to the stalk of a bunch of coconuts.  He then chops the coconuts with his machete and then uses the rope to lower them to the ground. He does this at almost free-fall speed, then stops them a few feet from the ground and gently lowers them the last few feet. The coconuts are now resting on the ground, the tension on the hook thing somehow releases, and he rapidly pulls it back up to attach to the next bunch. 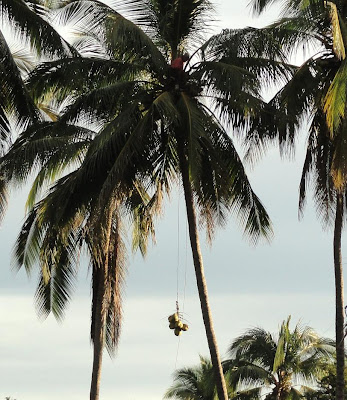 Once he has removed all the coconuts he wants he uses the rope to drop himself from the tree at almost free-fall speed until he stops just before hitting the ground. He doesn't appear to be wearing gloves but seems to have something in his hand to use as a brake on the rope, maybe just a piece of the palm tree. If you click on the picture to zoom in you can see the spikes on his feet and his right hand holding the rope. He may be using the hook thing to brake himself but it's difficult to tell. 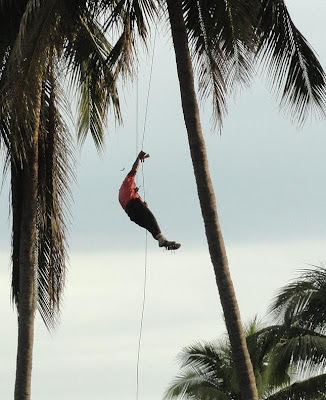 This guy never stopped to rest. He just went on to the next tree and walked right up it. He was in constant motion. I don't think I have ever seen anyone working quite so hard. If the trees were close enough together he didn't even go back to the ground but just got the rope swinging, caught a frond on the next tree, and pulled himself over. We don't have a picture of that performance.
This whole operation was like having a circus in our backyard. I wanted to applaud but was too amazed to move
Posted by Sue and Brian at 11:29 AM