The town of Tequila is fairly close to our RV park in Guadalajara so we decided to take a day trip and check it out (just for you, Vin and Connie). It's a very charming and clean town. 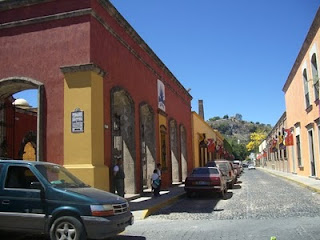 As we were wandering around town we came across the Tequila museum which was pretty interesting. There were exhibits showing the history of tequila as well as how it's been made throughout the years. 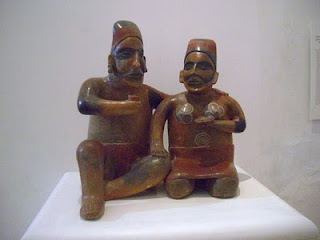 This statue of a couple sharing some tequila was one of the interesting things we saw in the museum.


Being around Tequila is much like being in wine country only the vineyards are replaced by fields of blue agave and the wineries are replaced by Tequila fabricas. We had heard that the best tour was at the Jose Cuervo plant which is right in town so we took their tour. As we came into the first courtyard we were greeted by this huge statue of a crow - neither of us knew that 'cuervo' in Spanish means 'crow' or 'raven', but it will be hard to forget after seeing this. Sort of reminds me of being in the middle of an Alfred Hitchcock movie. 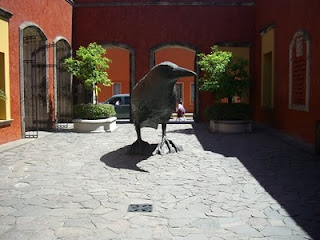 Some years ago tequila was a popular drink for getting drunk and crazy. Today’s tequila is a totally different drink. More comparable to single malt scotch or fine wine to be sipped slowly rather than downed in a single shot. This is not about getting drunk – it is about enjoying a very tasty drink on occasion. Tequila is carefully regulated by daily inspections of the entire process which adhere to strict standards and controls. Many tequilas are considered premium or super premium drinks and can be very expensive. Tequila comes from very specific regions of Mexico. 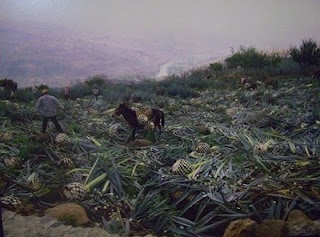 Tequila only comes from one very specific type of agave - Agave tequilana A. Weber – which is not a cactus but a member of the lily family. It takes from 8 to 12 years for an agave to mature. The “leaves” of the agave are cut away to leave a ball called a “pina” weighing up to 300 lbs. though most weigh between 80 to 120 lbs. (40 to 60 kg.)The person who cuts the leaves is called a jimador and he is an expert and an artist – the cuts must be made with a single stroke for each leaf. It takes about 7 kg. to produce one liter of tequila. 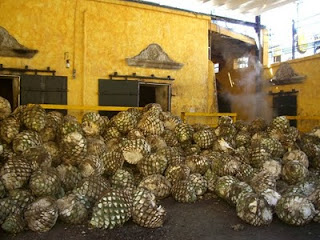 The pina is then cooked in ovens for from 10 to 48 hours to transform starches into sugar. It is then chopped up and crushed and mashed to squeeze out the juices. The juices are fermented to produce alcohol. Then the liquid is aged from a few days to over 5 years depending on the desired end product. Tequila is aged in French or American oak barrels much like wine or bourbon or other liquors. The oak barrels may be burned inside to impart flavor to the drink. Longer aging produces a smoother drink. 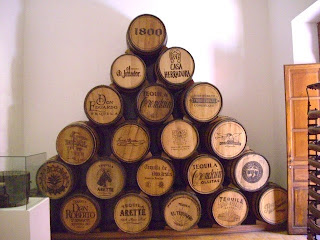 There are several types of tequila:
Blanco, white, plata, silver are all the same thing using variations of the name – this tequila is not aged and appears as a clear liquid almost like water. Blanco is sometimes aged but no more than 60 days – no more than 30 days if in oak.
Reposado is aged from 2 months up to one year in oak barrels. This is the most popular tequila. Slight amber color.
Anejo is aged in oak for at least a year and up to 8 to 10 years but usually for between 4 to 5 years. Darker amber color.There are other sub-groups of tequila but these are the basics.

One type of tequila is not necessarily better than another – it is a matter of taste – aging does not necessarily improve the tequila – some experts prefer the younger tequila because it has more of the taste of the fruit which the aging can diminish. Some like the smoother taste or the oaky or smoky taste. The best tequilas are hard to find even in Mexico and can cost hundreds of dollars per bottle. Many tequilas come in very artistic bottles and the bottles can be as desirable and collectable as the contents. We have seen bottles of tequila selling for thousands of dollars. 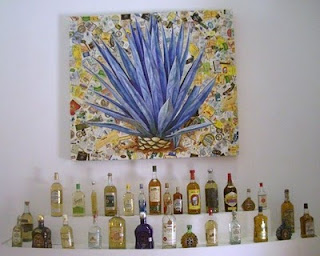 An excellent website where you can find out more than you ever wanted to know about tequila can be found at http://www.ianchadwick.com/tequila/index.html . Another great source for learning about tequila is http://www.tequila.net/ where they have lots of reviews and ratings.
Keep in mind that tequila is like wine and can change from year to year so reviews and ratings can be helpful. There are tequila tastings just like wine tasting and judges award points and ribbons for those judged to be the best. All in all – lots more to know about tequila than you probably ever imagined. You can continue to learn about agave drinks by researching Mezcal and Sotol which are also made from agave but not produced in the tequila regions of Mexico. Most Mezcal comes from Oaxaca and Sotol is from Chihuahua – they cannot be called tequila for geographical reasons but they can be just as good as any of the official tequila drinks – some might say better.
Posted by Sue and Brian at 3:47 PM