Heading for the Border

After our Guadalajara area adventures we headed for the border. We were in no rush so made a few stops along the way. Our first stop was in Celestino, about 40 miles north of Mazatlan. There are four RV parks and a really nice, deserted beach so we always enjoy stopping there. Tilly enjoys it even more and will run on the sand in the surf for as long as we let her. 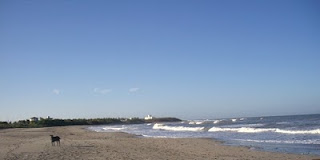 After leaving Celestino we stopped in Alamos once again to break up the drive. Alamos is an old silver town and home to a group of Americans and Canadians. At one time there were quite a few wealthy people there, including some movie stars, but it looked to us as though many of them have left. Still a beautiful town with wide streets, large homes and a lovely jardin in front of the church. 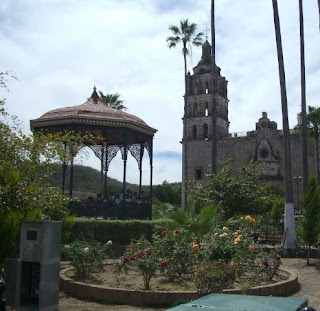 We went into Alamos on a Sunday and saw something we hadn't seen on our stop last year. There were costumed dancers around the square, making music and performing like mimes. Their costumes were all somewhat different but followed a common theme. 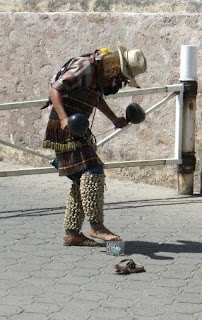 Very mysterious and we had no idea what they were all about. After leaving Alamos we saw other similar groups in several other towns. Still very mysterious. Once we were able to get on the internet we did some research and think that they are Yaqui Deer Dancers. Evidently they perform mostly during Lent and Easter week. The dancers we saw seemed to be very informal but the Deer Dance is part of a sacred ritual. 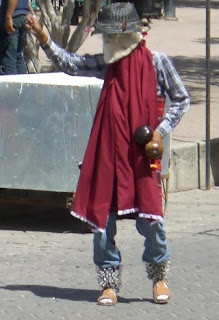 After leaving Alamos we stopped in San Carlos which was also more deserted than we had seen it, maybe because we were there a bit later this year. We took some new RV friends out to the Soggy Peso, a great little beach bar and watched the kite boarders. There was plenty of wind so it was fun to see. Before leaving we stocked up on the best tamales and chili rellenos ever as well as fresh shrimp the size of very large prawns. 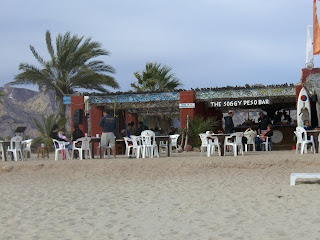 I'm often asked if I ever drive the Bus in Mexico and the answer is a qualified yes. Out of our entire trip I probably drove a total of 3 or 4 hours, and had Brian take a picture of the road when I was driving. 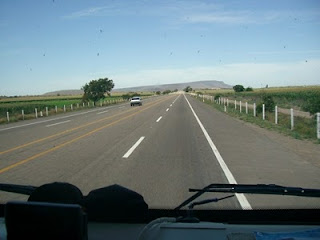 Here's a picture of one of the roads that Brian drives. Bit of a difference! 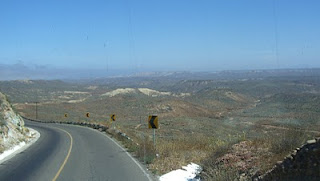