For a variety of reasons the town of Patzcuaro which is situated on Lake Patzcuaro in Michoacan was one of our must-see stops this year. It has been largely undisturbed until lately by tourists and thus has retained its character. We are staying in a very nice RV Park with a fabulous view of the lake and its main island, one of five, called Janitzio, where houses hang on the steep slope up to the top of the island where a huge statue has a commanding view. We have a commanding view as well. 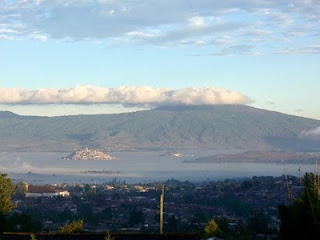 Patzcuaro is in a mountainous region more than 6,000 feet above sea level. There are forests of many types of trees. There are lakes in the mountains. It is cooler here than other parts of Mexico. As we have driven around the area we have commented more than once that it feels as though we’re back in Colorado.
The town of Patzcuaro was once an important religious and political center of the Tarascan people, many of whom inhabit the area. As we’ve explored we have seen many Tarascans who continue to live their lives as they have for centuries (with some modern conveniences of course). Many of the women and girls wear very colorful, hand embroidered clothing. 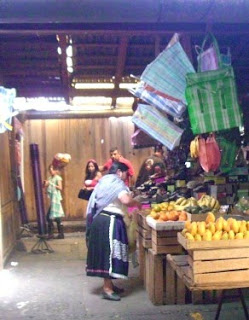 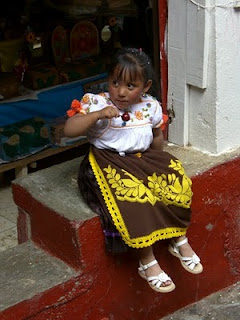 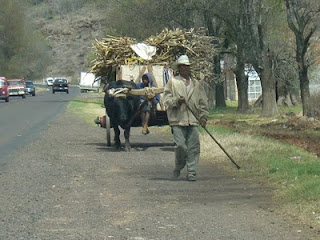 Some of the people in this area use oxen, burros and horses as work animals. It's not unusual to see a burro piled high with bags or a farmer in his fields following his horse and plow. 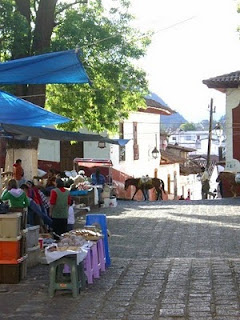 Horses and burros are often seen going through town delivering wood, milk and other necessities.
The buildings in Patzcuaro and the surrounding area are easily distinguished from other areas we have visited. The buildings tend to be white with a sort of red wainscot, red tile roofs, overhanging eaves, and the lettering of the signs on the buildings starts with the first letter in red and the letters after that in black. It’s a very different style than we have seen anywhere else.  There are often vendors, stores and sidewalk cafes under the porticos. It's a great place for people watching. 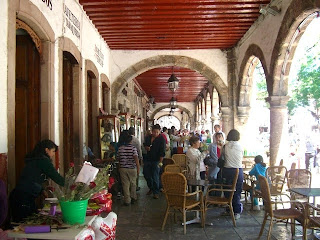 The crafts we have seen in Patzcuaro are simply amazing. The town’s founder, Bishop Vasco de Quiroga, implemented a plan where area villages were each assigned a different skill and a form of this plan continues today. The village of Santa Clara de Cobre is known for its copper, Cuanajo for its wooden furniture and so on. 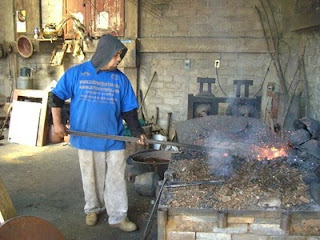 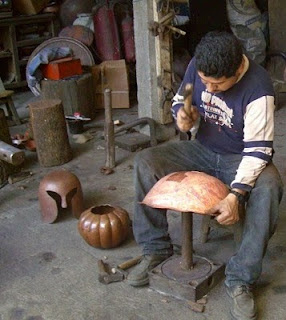 We took a fun day trip to Santa Clara de Cobre which is only about 10 miles away. While there we were able to see people working with the copper. They seem to be able to bend it into impossible shapes. Some pieces are etched and/or electroplated with silver. They heat the metal repeatedly as they beat it with various hammers. They temper the metal by dipping it quickly into a tub of water. As they beat the metal it becomes stronger. 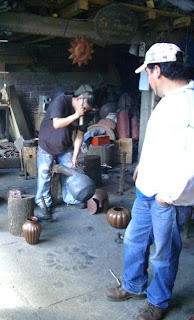 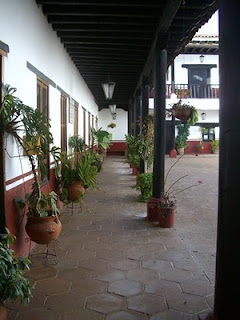 We have been able to watch some of the artists at work in the La Casa de Los Onces Patios which showcases many of the local artisans. The large building was once a Dominican convent. Now patios and cells are full of colorful crafts.
One of our favorites is the lacquerware painting which is incredibly detailed and extremely time intensive. The artists painstakingly use paints and gold-leaf to decorate plates, vases, jewelry and many other things. The finished products are fantastic. I was able to photograph a clock which the artist was just beginning to decorate. 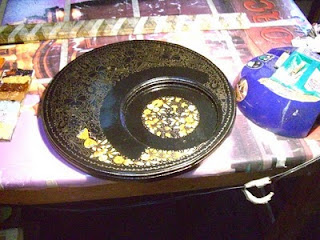 In addition to the lacquerware there are a variety of wares from the local artisans. Woven tablecloths, napkins, shawls and other colorful textiles abound. The local women offer an abundance of intricately embroiderd items. Baskets are handmade from reeds harvested from Lake Patzcuaro. Masks, boxes and statues are carved from the local wood. It's impossible to list everything that can be found here as well as in the neighboring stores and stalls.  Just amazing.
JANITZIO
The island of Janitzio is the most populated and easiest to reach of the islands in the lake. Cobblestone steps wind their up to the top of the island where the 132 foot Monument to Morelos dominates the landscape. 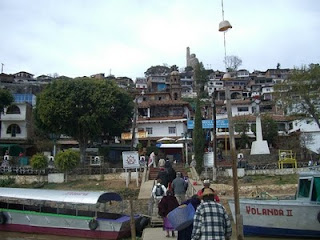 Boats run back and forth on a fairly regular basis to accomodate not only the people who live there but the tourists as well. There weren't many tourists on the day we went but there were plenty of souvenier shops. We had hoped to see some local artisans but unfortunately the shops appeared to be stocked primarily with factory made junk.
After a long trek to the top of the island we entered the statue. We made our way up to the top of the arm along a series of interior staircases which were lined with murals depicting the independence of Mexico. It's hard to imagine how much work went into both the murals and the constuction of the statue. Quite impressive.
I'm not a fan of heights so the murals were a welcome distraction as we made our ascent. Once we reached the top we had some great views of the surrounding area. 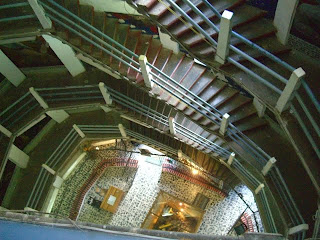 AROUND THE AREA
We have truly enjoyed our time in this unique area and hope to return one day. Some other sights to share....... 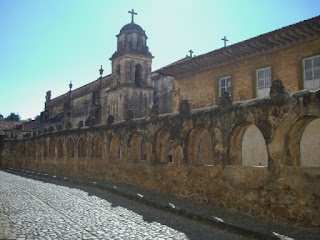 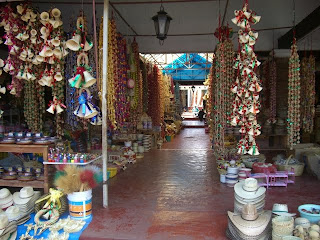 One of the markets in Tzintzuntan selling just about anything that can be made from reeds or straw. 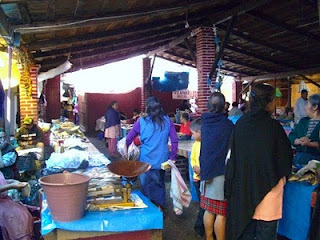 Friday market in Patzcuaro. There is an amazing variety of goods and it appears most of the locals do the bulk of their shopping here. The fruits and vegetables were fresh and cheap, the fish were still breathing and the food stands smelled heavenly. I don't know how much area the market covers but it seemed to go on and on. I think you could spend the whole day in there and not see everything. 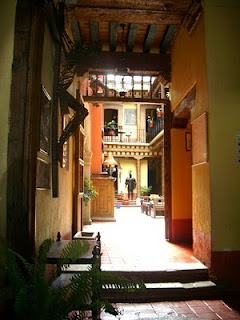 One of the hotel courtyards. There are several very nice hotels in Patzcuaro and we love peeking into their doorways.
Posted by Sue and Brian at 4:21 PM