Circles in the Sand 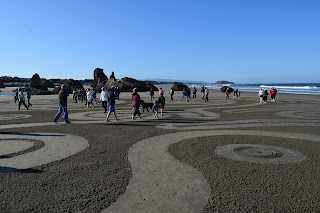 A bit about Denny Dyke from the Circles in the Sand website https://www.sandypathbandon.com/
'Labyrinth artist, Denny Dyke first created Circles in the Sand for his own walking meditations.  He soon became fascinated with the ocean and the ever-changing sand.  After three years and hundreds of labyrinths later, the first Dreamfield Labyrinth was created in September 2014.
The path of the first Dreamfield meandered through seven spirals and returned near the entrance.  Today the Dreamfields have grown larger with a path meandering through a much larger pattern.  Always with one path, no dead ends or no wrong turns and returning home.  A true labyrinth experience on the sand.' 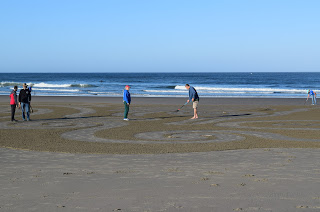 I'm not sure what time Denny and his team began the labyrinth, sometime after the tide went out, but the walking time was from 8AM to 10AM. After 10AM the tide started to come in and erase the labyrinth.

This photo is from the overlook, showing the scope of the labyrinth. 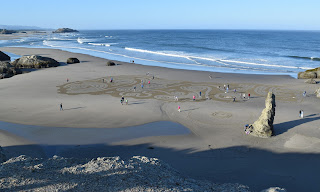 We walked down a series of staircases to get to the beach. Before beginning the walk, Denny introduced his team and welcomed us to enjoy the walk. He's second from the left in the photo below. 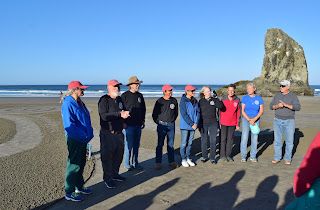 This was a magical experience, hopefully the photos can convey some of that sense of wonder and showcase the amount of work that went into this labyrinth. 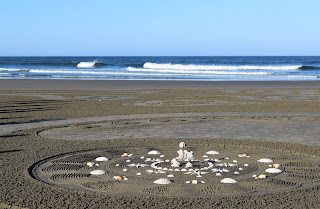 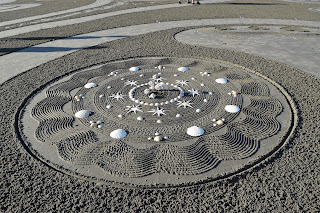 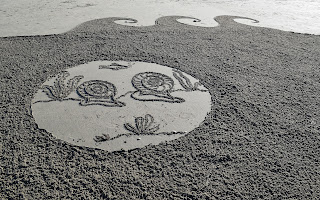 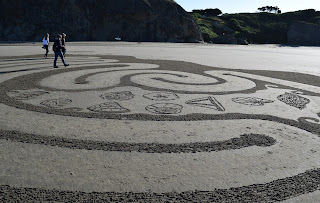 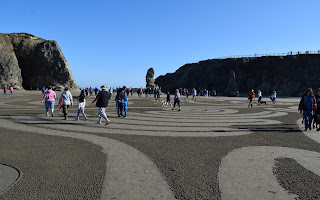 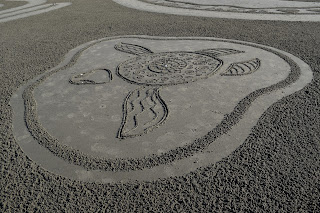 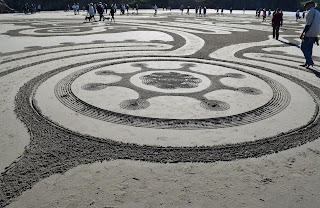 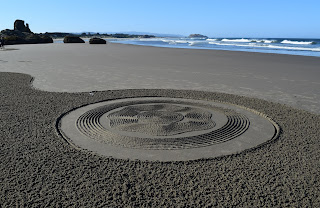 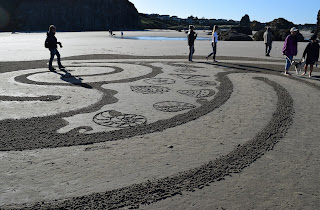 This gentleman is the Bubble Man, and evidently he comes to many of the labyrinths. He told me that his daughter makes her living traveling all over the world doing bubble art, and that her largest bubble enclosed an elephant. Yikes! 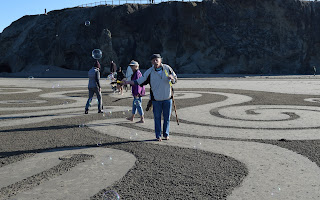 After experiencing the labyrinth we did some further exploring and had lunch. We returned in the afternoon to see how our Circles in the Sand were doing. 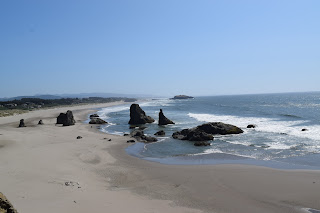 Pretty much gone with the tide. It boggles my mind that Denny and his crew spend so much time and are so creative, just to share a bit of peace and joy with the world. He says that the energy from the labyrinth goes back to enrich the sea.

Here is another link in addition to the one I mentioned at the beginning of this post  https://www.sandypathbandon.com/ that also has a beautiful video.