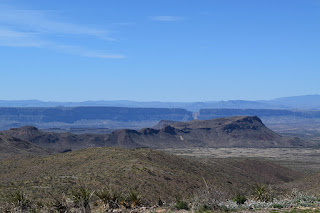 Brian and I have wanted to stop at Big Bend NP on our way back from Mexico for several years, partly as part of our quest to see as many national parks as possible and also because of its featurs. Big Bend is one of the largest, most remote, and one of the least-visited national parks in the continental United States, but it's still difficult to get a campground reservation there.
One of the main attractions are the hiking and backpacking trails. Big Bend is also known for its dark skies and stargazing.In 2012, the park was designated an international dark-sky park by the International Dark-Sky Association. Measurements made by the National Park Service show that Big Bend has the darkest skies in the continental United States. Thousands of stars, bright planets, and the Milky Way are visible on clear nights. Unfortunately we were there during a full moon with cloud cover so we weren't able to get the whole dark sky experience.

Big Bend is very popular during early spring so we've never been able to get a campground reservation and boondocking isn't allowed in the park. Since it's so vast and off the beaten path it only made sense to us to go if we could get into one of the campgrounds. There are only two campgrounds in the park that will accommodate rigs over 24 feet so our choices were limited unless we wanted to stay outside of the park and spend half our day driving into and out of the park. We got lucky this year and were able to reserve two consecutive nights, the only ones available in February or March. 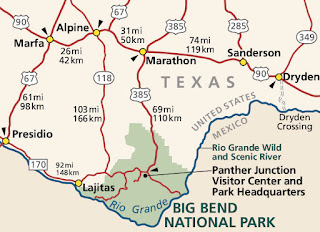 Big Bend covers 1,251 square miles and there aren't very many maintained roads so it takes a while to get around. The roads in the park end at the Rio Grande River, which is the boundary between the United States and Mexico. More than 1,000 miles of the river are part of the boundary and 118 miles of that are in the park. Many of the park's features have been shared with Mexico for thousands of years. Santa Elena Canyon, one of the park's best known and most photographed features is half a canyon in the U.S. and half a canyon in Mexico, and the Chihuahuan Desert is shared by both countries.

We spent our time on our first day exploring the area around the campground. We drove out to the Boquillas Canyon overlook where visitors often cross to visit the Mexican village of Boquillas. In the photo below the plateau is in the U.S. and Boquillas is in Mexico. It's a good example of how much the river bends, pun intended. 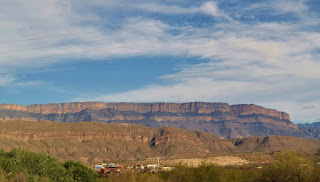 We continued on to Boquillas Canyon and hiked into the canyon. The Rio Grande begins in south central Colorado and flows to the Gulf of Mexico. Much of the water is diverted before the river reaches Big Bend. 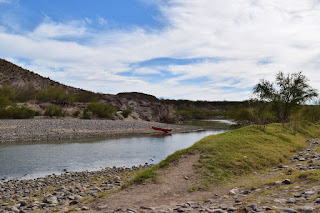 Boquillas Canyon is one of three major canyons in the park. Although the water level was low, it was still impressive to see the canyon walls and rock formations. The woman walking into the canyon in the photo below gives some perspective of how high the canyon walls are. We enjoyed the hike although it was super hot - wrong time of day to be hiking but it was our only chance so we took it. 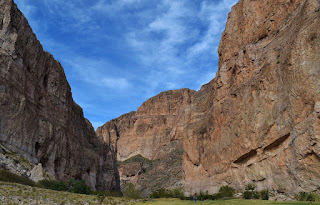 Santa Elena is the most well-known canyon and it was our first destination on our second day. We got up early to make the drive, well over an hour from our campground, in an effort to beat the heat and other hikers. Good decision, and it worked out well. The canyon is spectacular. 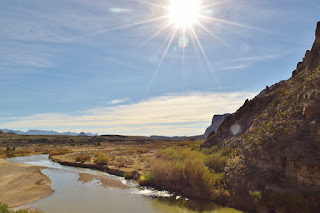 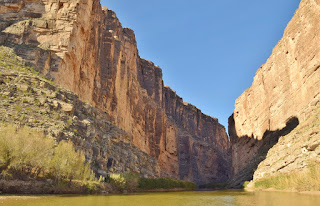 We hiked a trail that followed the river, ascending at the beginning before coming back down to water level. The photos above were taken at the entrance to the canyon, looking both ways. 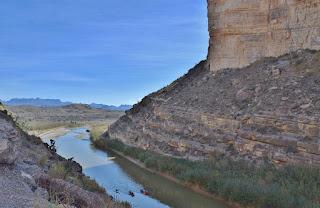 We saw several groups of people canoeing the canyon. 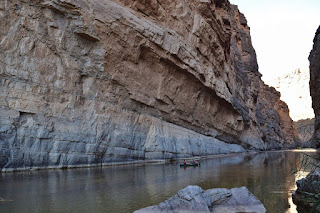 From what we could determine, canoeing on the river is allowed as long as one has a permit. It appeared there were places to camp upriver. When we saw a large group of people returning downriver with a guide we checked things out and found that there are several companies that are licensed to escort river trips.

Big Bend has several ecosystems - river, desert, and mountain. After leaving Santa Elena canyon we headed for the mountains. Not mountains by Colorado standards but definitely not desert. The elevation in Big Bend ranges from 1800 feet to 7832 feet so maybe these could be called mountains. 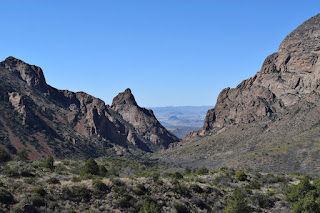 We had a fun, if tiring few days and saw a limited amount of Big Bend. It would take more than a few days to see it all but I think we got a pretty good idea of what it has to offer.