Now that we find ourselves in the San Diego area it's pretty obvious I haven't done much posting as we've worked our way down the West Coast. Time to catch up - some stops along the way included...

We had a difficult time finding RV parks with space available this year, particularly along the Oregon Coast. One of the things we've always enjoyed about the RV lifestyle is the ability to make our own schedule. If we happen to really like a place we often stay longer than planned, if not we leave earlier than expected. When we were in Oregon most of the parks I called were booked up and could only fit us in for a night or two. That really limited our time in Oregon. In fact, we weren't able to do any wine tasting in the Willamette Valley because the parks were all full which was a disappointment for me. So we just moved along. 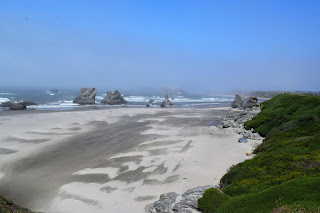 Too bad because it's a really beautiful coastline with some great beaches for walking. 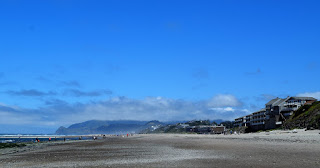 Lots of little harbors and lighthouses. 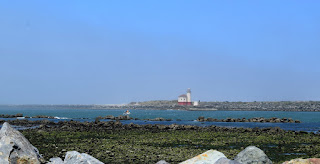 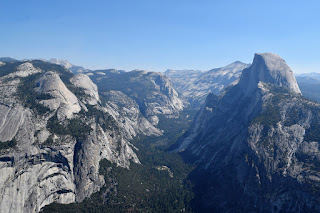 When asked what our favorite National Park is, we usually say 'Yosemite'. We made the decision to detour a bit to the Sacramento area where we spent some time with friends Ken and Kris, and from there up to Yosemite. Of course all the campgrounds near the park were fully booked, but we were able to find a spot on the south end near the town of Coarsegold. It took over an hour to drive up to the Park, but we spent a few days there and were able to do some hiking. 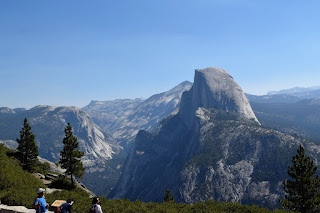 Unfortunately there were forest fires in the area so the skies were a bit smoky. As we've found in many places during our travels the last few years, the crowds and traffic have greatly increased. Nice that so many people are enjoying our parks, but it can make things difficult.
This view is from Glacier Point, looking down at Yosemite Valley. When we got down to the valley the traffic was bumper to bumper and finding a place to park was challenging to say the least. 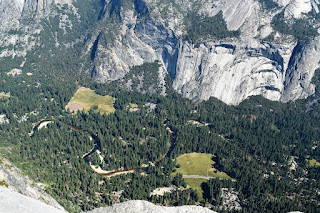 As we drove down from Glacier Point we were able to pull over and park at one of the viewpoints overlooking the valley. 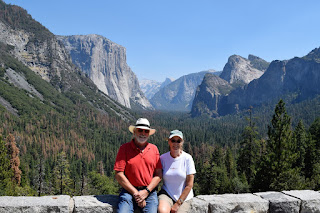 At this time of year, maybe because of the drought, Yosemite and Bridal Veil Falls, two of the most photographed falls, were only a trickle. However there was some water flowing over Nevada Falls and Vernal Falls which can be seen if you look closely at the photo below. 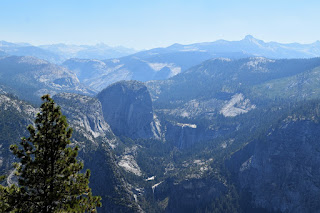 We probably visited Yosemite at the wrong time of year, something to keep in mind for next time. But, we still love it there! 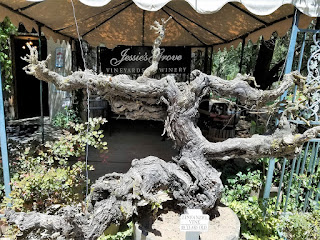 No way we could work our way through California without stopping in two of our favorite wine tasting areas, Lodi and Paso Robles. One of our favorites is Jessie's Grove in Lodi, where the zins are fantastic and made from some very very old vines. The vine above is 118 years old. The zinfandel vines are head-trained which means no trellises are used. The vines are dry farmed and prized for their production of small, concentrated clusters of grapes that produce incredibly rich and intense wines. I can verify that.

We were near areas where some of the big fires in California were occurring. We encountered smoke from the fire near Yosemite, and almost didn't stay in Paso Robles because of the smoke from the Chimney Fire which burned 46,000 acres to date, destroyed 49 homes, and is only 60% contained. On one of our Paso Robles days we drove to Morro Bay and Cambria which are on the coast. On the way back we saw smoke billowing from the Chimney Fire. It came within 2 miles of Hearst Castle, near Cambria, which is a National Historical Landmark that we have toured twice. Absolutely priceless art and antiques that may still suffer some smoke damage.

The Rey Fire was taking hold as we got to Santa Barbara to visit with friends Kathy and Dan. Some days were a bit smoky, but more imposing were the views of the fire on the other side of the mountain. It has burned 33,000 acres and is 68% contained as of today. No homes lost in this one. 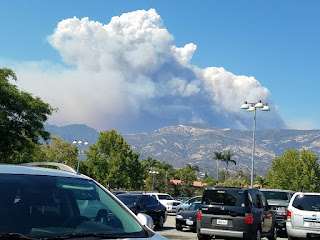 The effects of the drought were apparent as we drove south. It's not surprising that California, along with other states, is facing so many wildfires.
Firefighters face incredibly hot temperatures, smoke, and many other hazards. I read that 500 firefighters on the lines of the Sobranes Fire near Monterey have been treated for the effects of the poison oak.  Lots of admiration and thanks to those men and women who put their lives at risk to put out these fires!
Posted by Sue and Brian at 6:43 PM