We had some spectacular scenery as we traveled from Boulder County, Colorado to Boulder, Wyoming.
Once we started to head north from Rock Springs, Wyoming there were some great views of the mountain ranges rising above the plains. We were south of Grand Teton National Park and Yellowstone, so I'm assuming we were looking at some of the same mountain ranges. Still lots of snow on the mountain tops.

Just north of Rock Springs near Pilot Butte we saw several large herds of wild horses. Awesome! After a little research I learned that most wild horses in Wyoming are located in the the southwest corner of the state. The Rock Springs district has the most - approximately 2,500. Concerns over the impact of the horses on the environment because of their rapidly growing population (20% to 40% a year) have led to removal of some of the horses from the range by the Bureau of Land Management. As a result, the BLM states that there are fewer cases of injury or death from starvation, dehydration, and susceptibility to the elements. The horses that are removed are held in Rock Springs at the only federal short-term and preparation facility in Wyoming. They house around 700 horses at any given time. The horses are available for adoption, so if you're looking for a horse this could be a good place to find one. 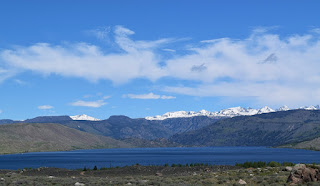 We had planned to spend one night in Boulder before moving on, but as so often happens we thought it was a pretty interesting area and decided to stay a little longer. Just north of Boulder is the town of Pinedale (town motto 'Pinedale - All the Civilization You Need'). From Pinedale we explored parts of the Bridger National Forest and Wilderness Area. The photo below is Half Moon Lake. There's a beaver lodge in the smaller lake on the right. 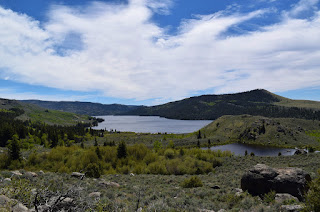 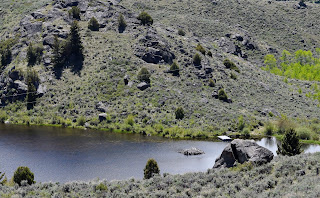 The water in Fremont Lake is incredibly blue, and surrounded by groves of aspen and pine trees. 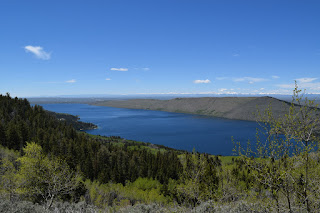 We took a route called Skyline Drive with hopes of doing some hiking. Unfortunately there was too much snow to get very far out of the parking lot so we had to scrub that idea, but we had some great views of the Wind River Range. The peaks are close to 14,000 feet with Mount Fremont being the tallest at 13,743 feet. 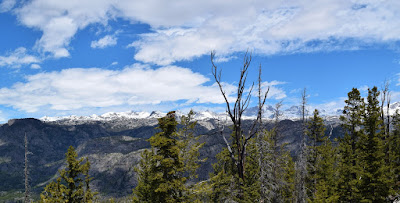 Pinedale has another claim to fame. It's called the Path of the Pronghorn Wildlife Corridor. Each spring and fall, hundreds of pronghorn migrate 170 miles to and from their summer range in Grand Teton National Park to the Pinedale area. By tracking the pronghorn biologists found that one bottleneck for pronghorn moving along the migration path was at Trapper’s Point. The path there is constricted to a narrow intersection where thousands of animals were forced to cross U.S. Highway 191. The highway crossing created a dangerous situation for humans and wildlife alike. 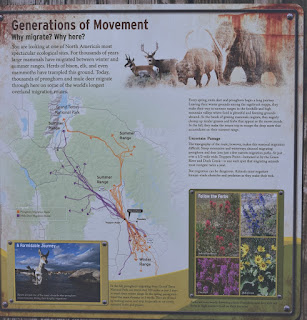 In 2010, the Wyoming Department of Transportation used the information from the biologists to develop the wildlife corridor. They invested $9.7 million along US 191 to install fencing and crossing structures to protect both wildlife and highway travelers. In the fall of 2012, 8 wildlife crossing structures and 23 kilometers of fencing were completed. They now successfully guide pronghorn and other wildlife safely under and over US 191, avoiding the risk of collisions with vehicles. We had seen overpasses for wildlife while we were in Canada several years ago but this is the first time we encountered any in the States. 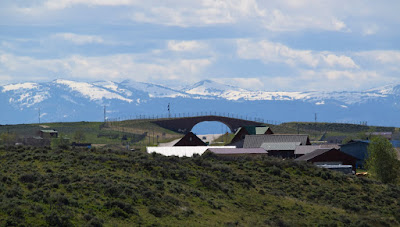 Pinedale also has the Museum of the Mountain Man. The museum has visual and interpretive exhibits about the era of the mountain man, the Plains Indian, the Oregon Trail and the development of this region. Green River Rendezvous Days, an event patterned after the old time rendezvous of the mountain men, are held there in July. It's an interesting museum - more about it can be found at http://museumofthemountainman.com/

We enjoyed our time in the area and I'm sure there's a lot more to see and do. We really love it when we stumble across places like this in our travels. 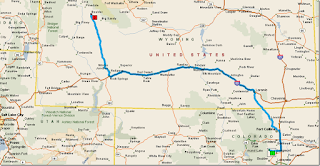