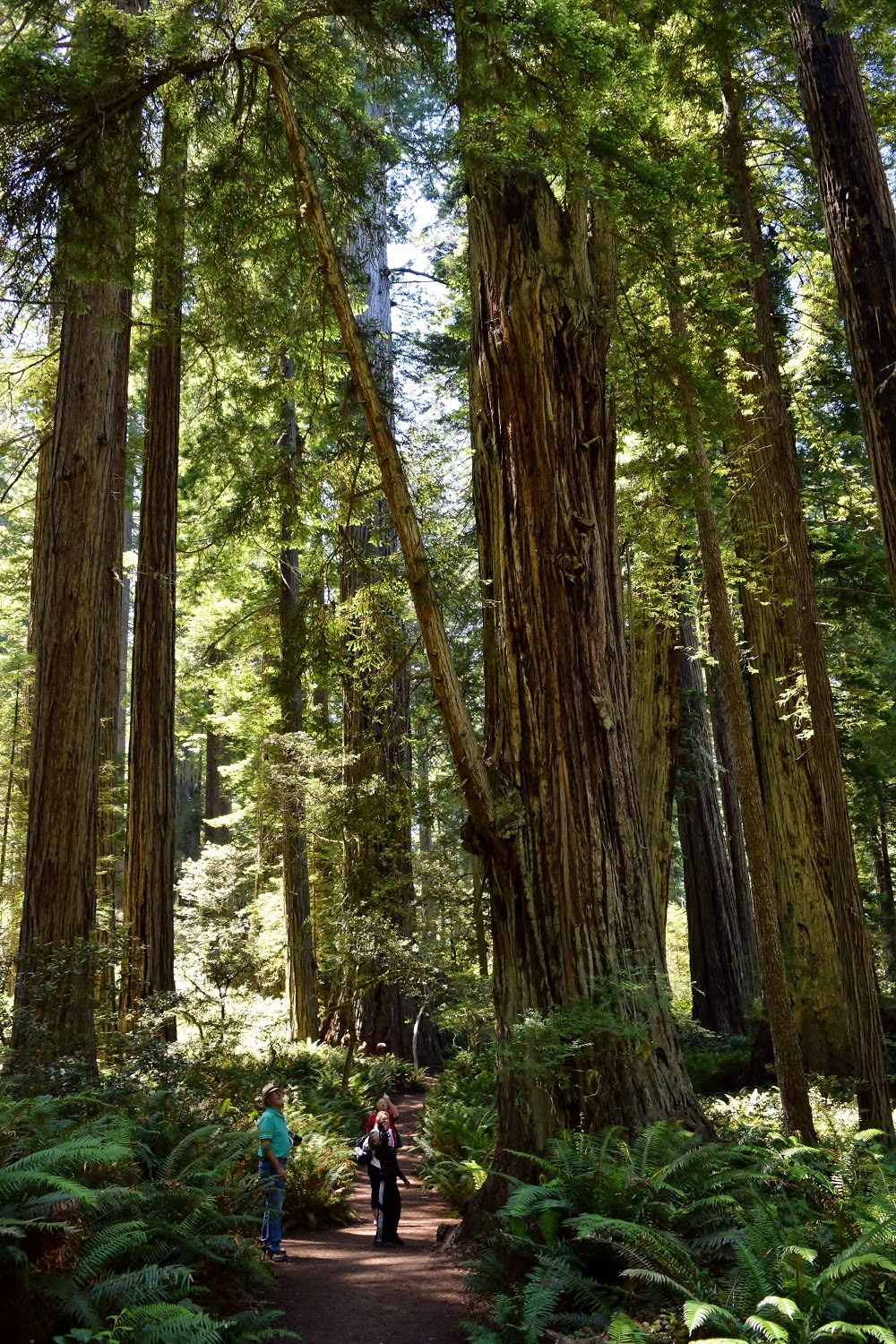 There was no way we were going to bypass the redwoods on our way through northern California. It's difficult to describe the feeling of walking through the redwood forests, surrounded by the world's tallest living trees. Trees over 370 feet tall have been recorded in this area.Coastal redwoods can live up to 2,000 years and average 500 to 700 years old. Giant sequoia trees grow to a larger diameter and bulk, but do not grow as tall. Hard to believe when standing next to a redwood with a diameter like the one below, and we saw some that were even larger. 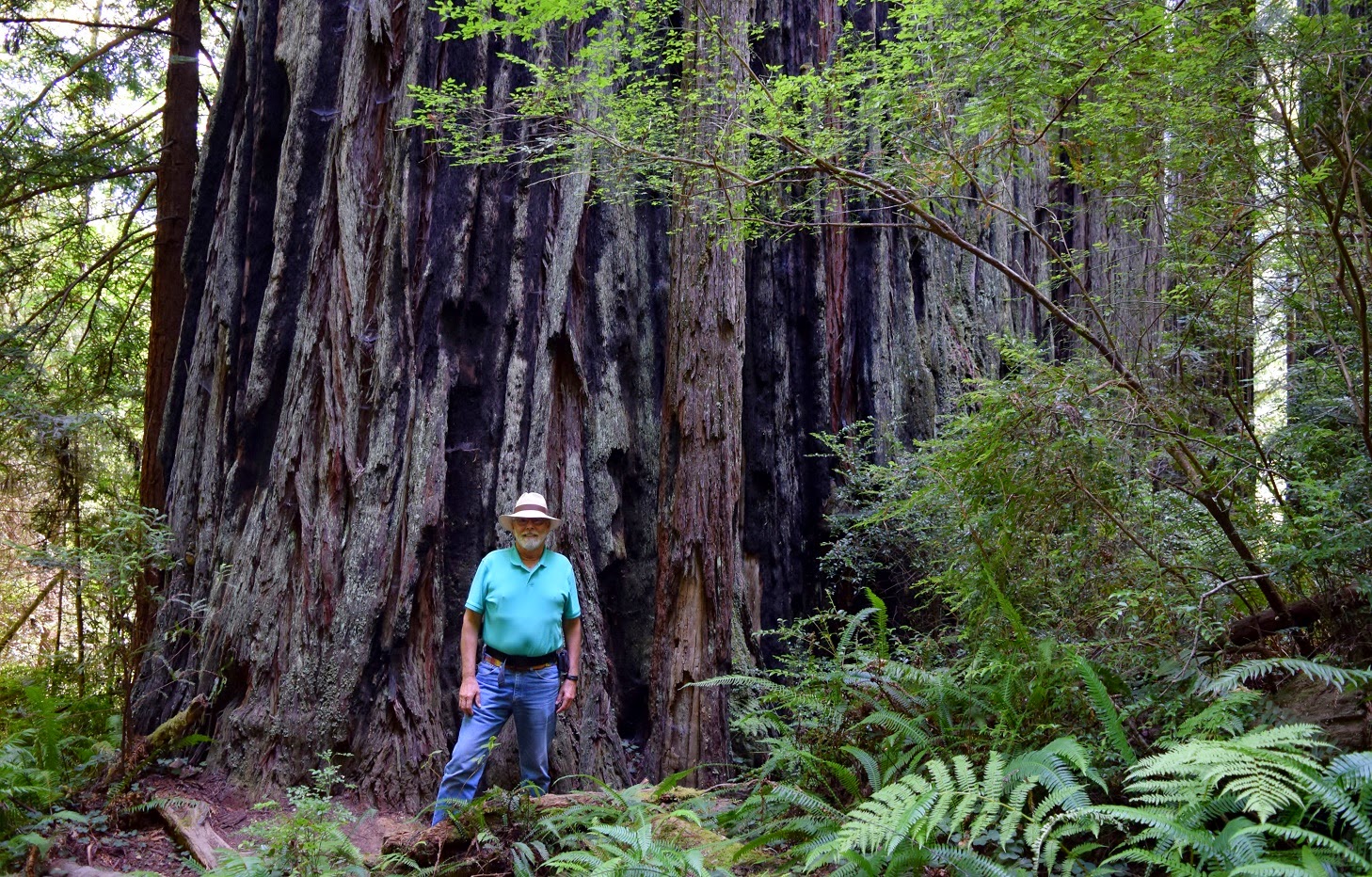 There are three state parks that are encircled by Redwood National Park so it would be easy to spend days exploring them all. The state parks were established in the 1920s but it wasn't until 1968 that Redwood National Park was created and then expanded in 1978. Together the parks are a World Heritage Site as well as an International Biosphere Reserve. Intense logging has reduced the coastal redwood forest to a fraction of their original expanse. It's estimated that in 1800 the redwood forests covered approximately two million acres. Today the national and state parks protect only 40,000 acres. Only 4% of the original old growth forest remains. Hopefully they will now be a protected resource to be enjoyed and cherished by citizens of many nations. 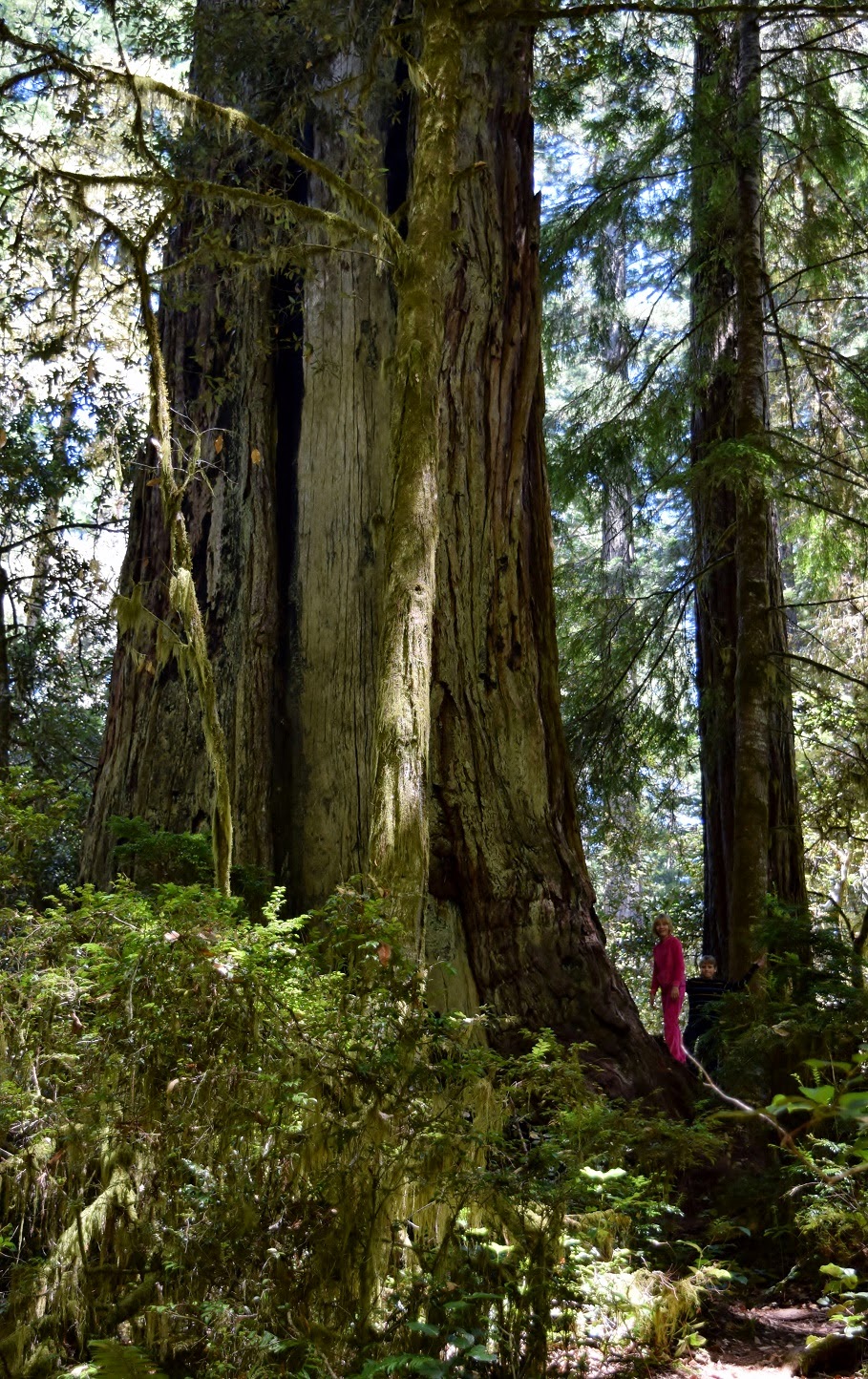 We began by taking an easy hike up to Lady Byrd Johnson Grove, so named because she dedicated park in 1968. We were joined by an interesting and friendly family, and we enjoyed walking and talking with them. Their kids, Anastasia and Andy, were fun to watch as they ran around exploring everything and being as astounded as we were by the size of what we were seeing. The picture above shows Stasia and Andy being dwarfed by one of the massive trees. Stasia made a great model because she was so easy to spot in her bright pink outfit. 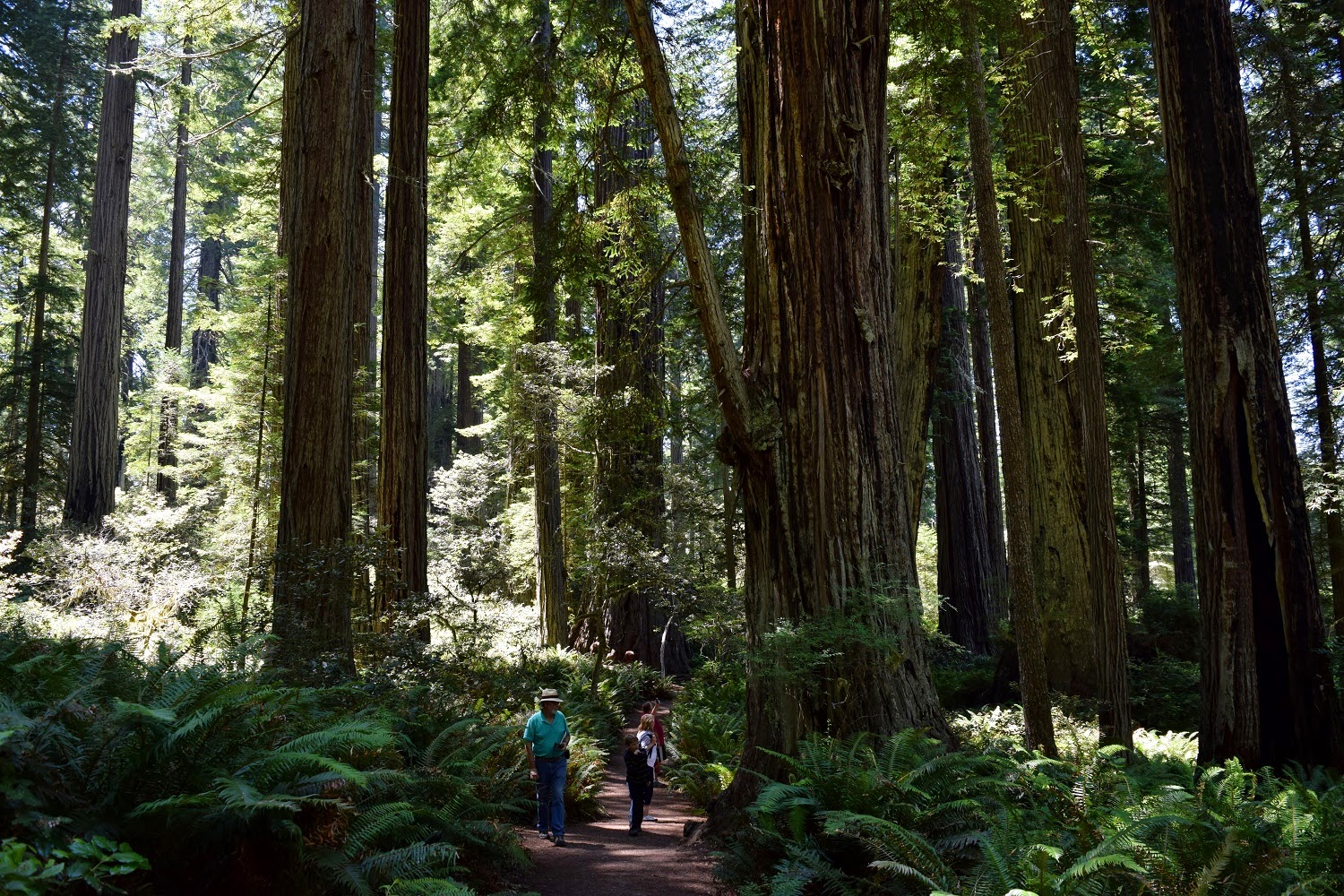 We came across some interesting political quotes in the official Visitor Guide of Redwood National and State Parks under the heading 'Tree Politics Remembered.' I thought I'd share them.

Adlai Stevenson II, referring to Richard Nixon. "A hypocrite is the kind of politician who would cut down a redwood tree, then mount the stump and make a speech for conservation."

President Lyndon Johnson is his dedication speech establishing Redwood National Park. "Conservation is indeed a bipartisan business because all of us have the same stake in this magnificent continent...it is going to belong to our children and their grandchildren."

Ronald Reagan in response to a proposal to create Redwood National Park. "A tree is a tree. How many more do you have to look at?" 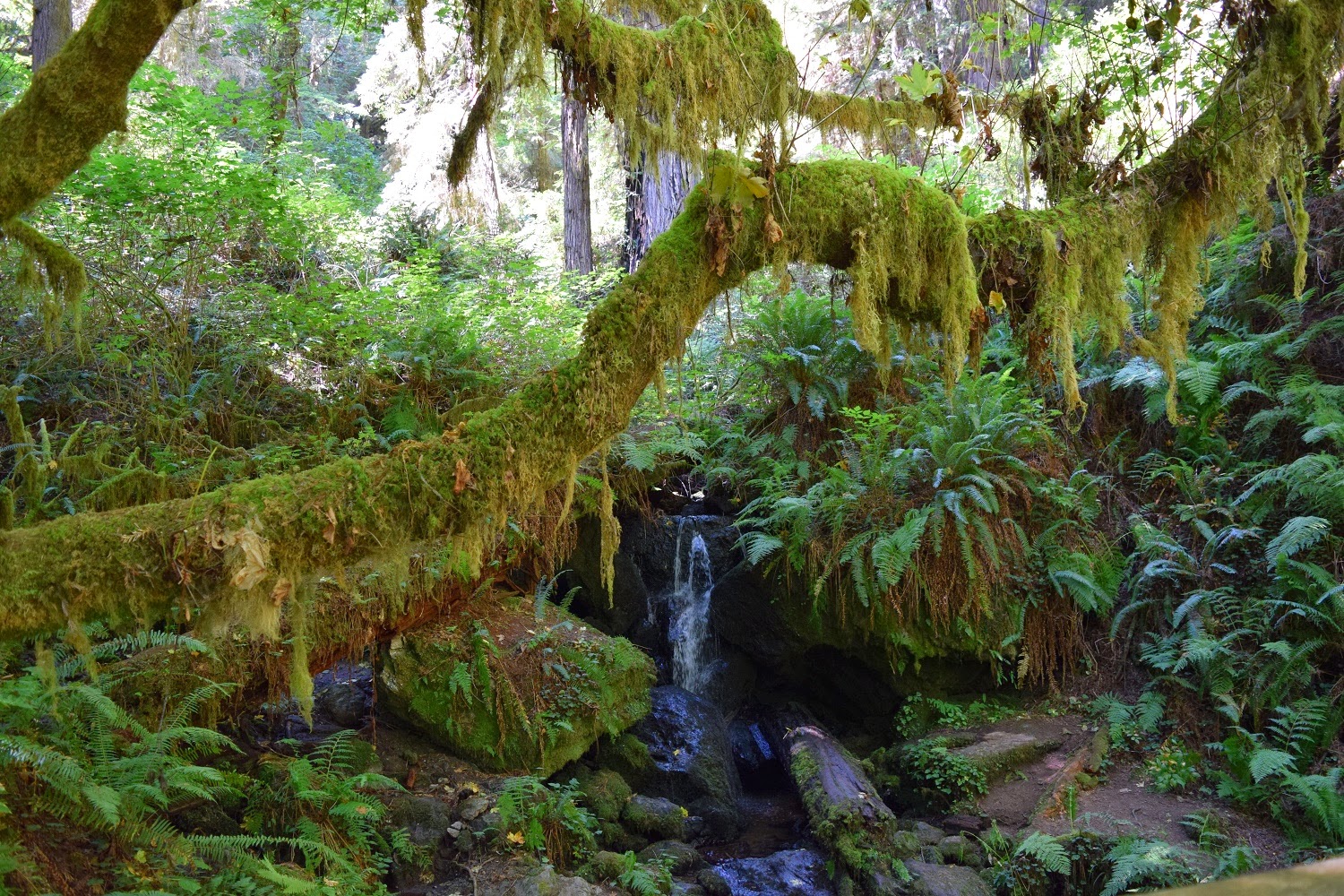 We wanted to spend more time in the forest so we took a 3 mile hike which went up to Trillium Falls and then looped up and down through the redwoods. Incredible experience, sorry I don't have the words to properly describe it. 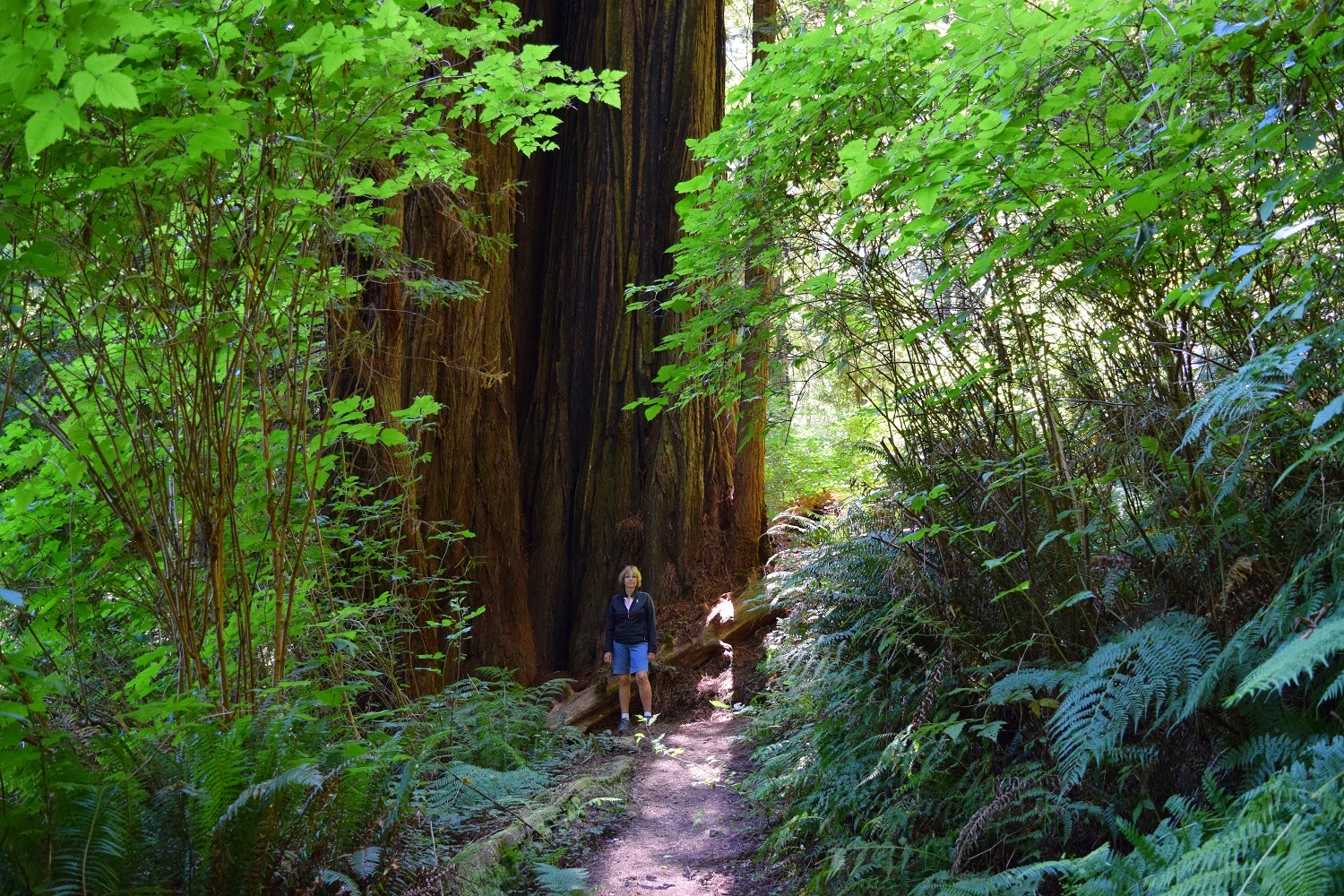 Thick bark, roughly one foot deep, makes the redwoods impervious to fire and insects. We saw many trees that had obviously been on fire at one time but were still living. The picture below shows Brian coming out of a tree that has been hollowed out by fire, but still growing. 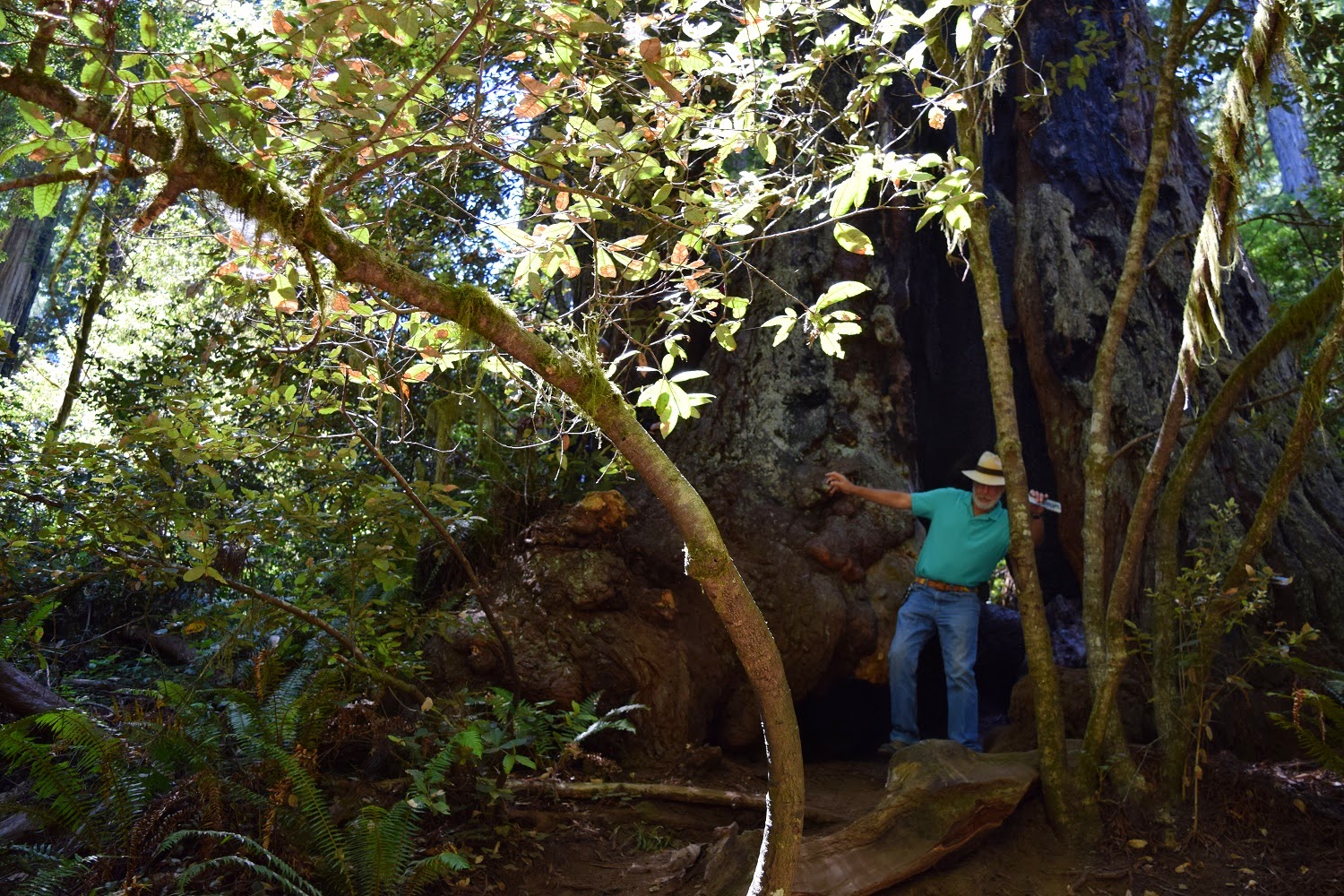 We also saw many trees that had toppled at one time. Their roots were HUGE. 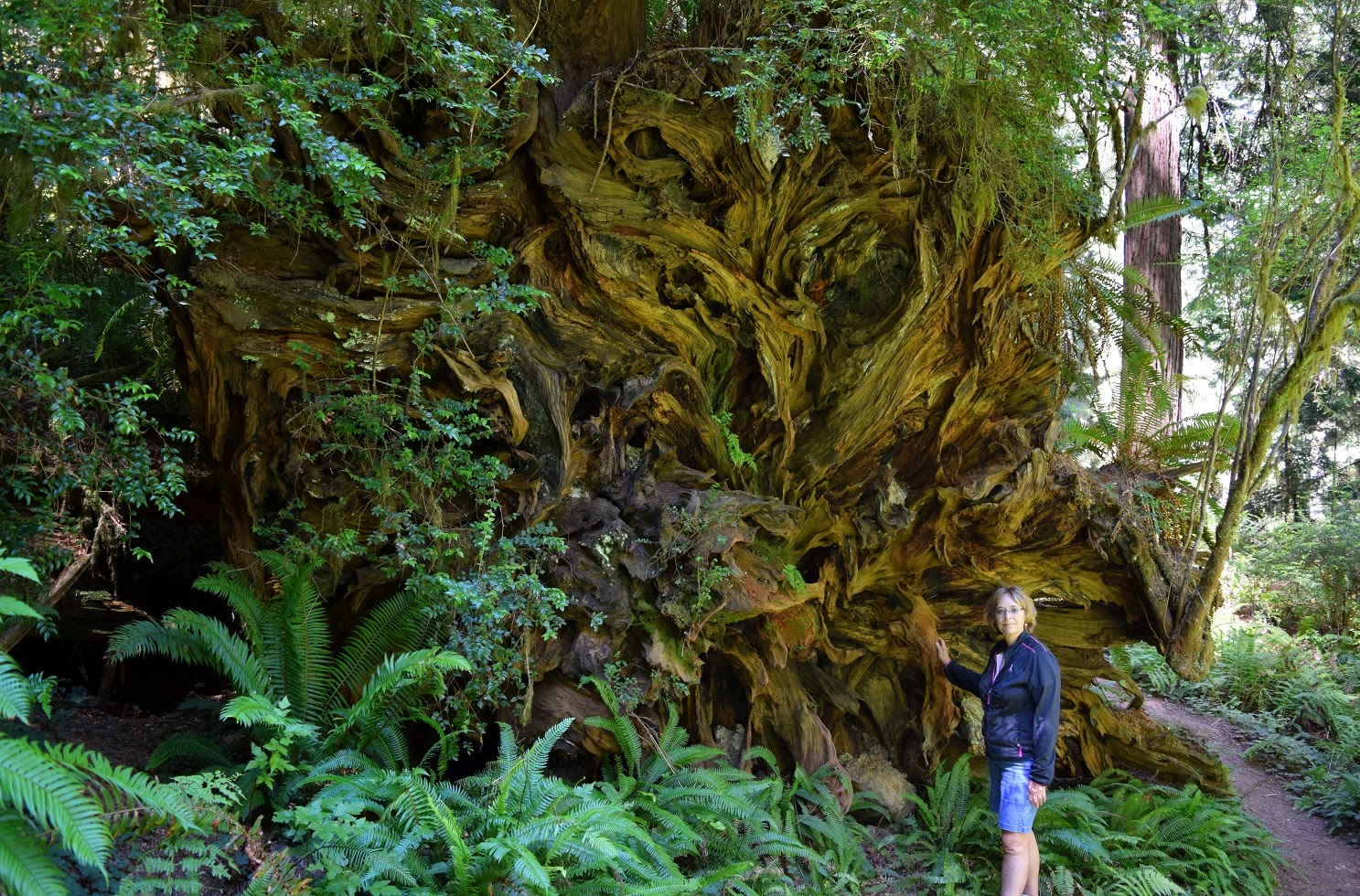 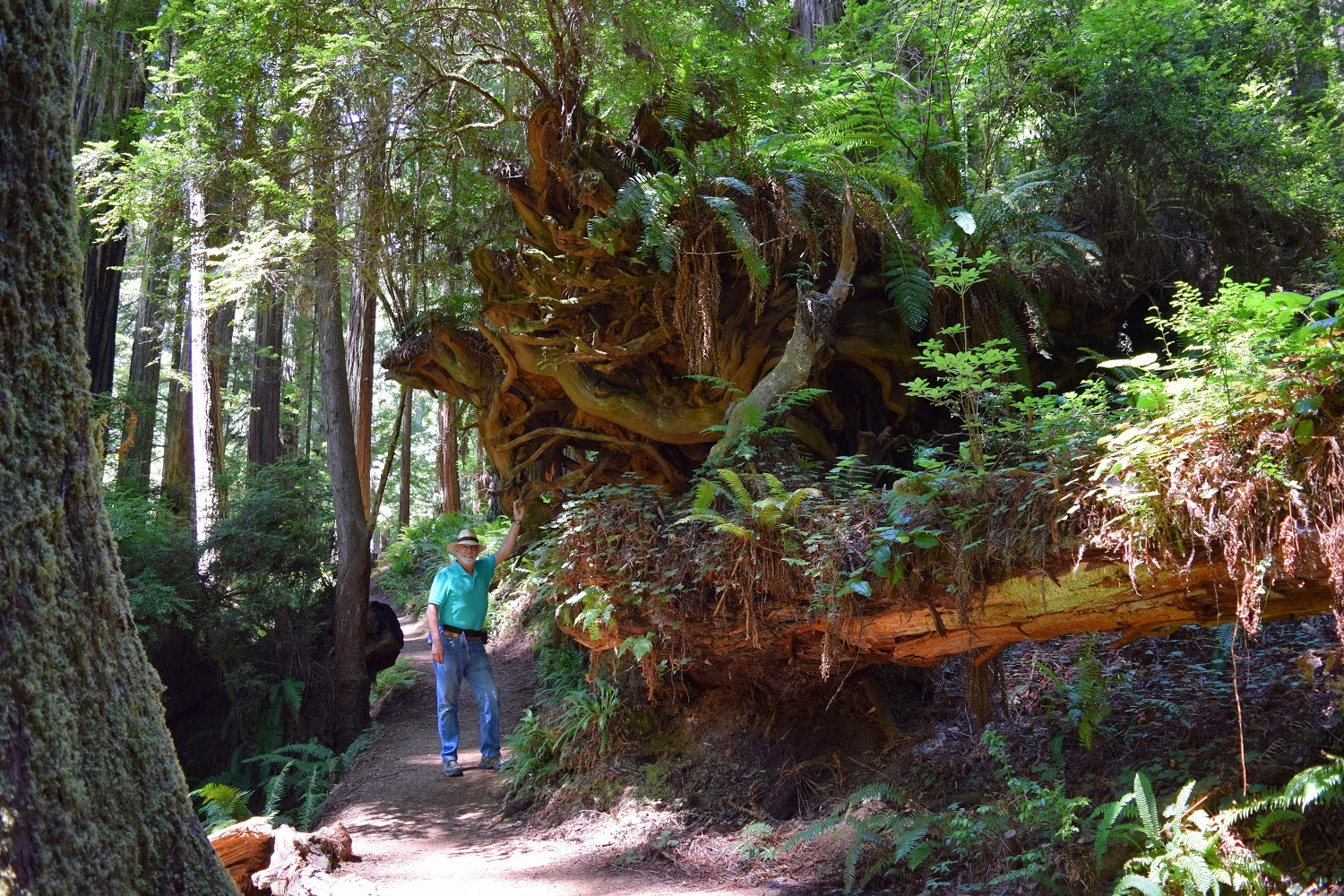 Up close the roots had a bit of a psychedelic quality about them. 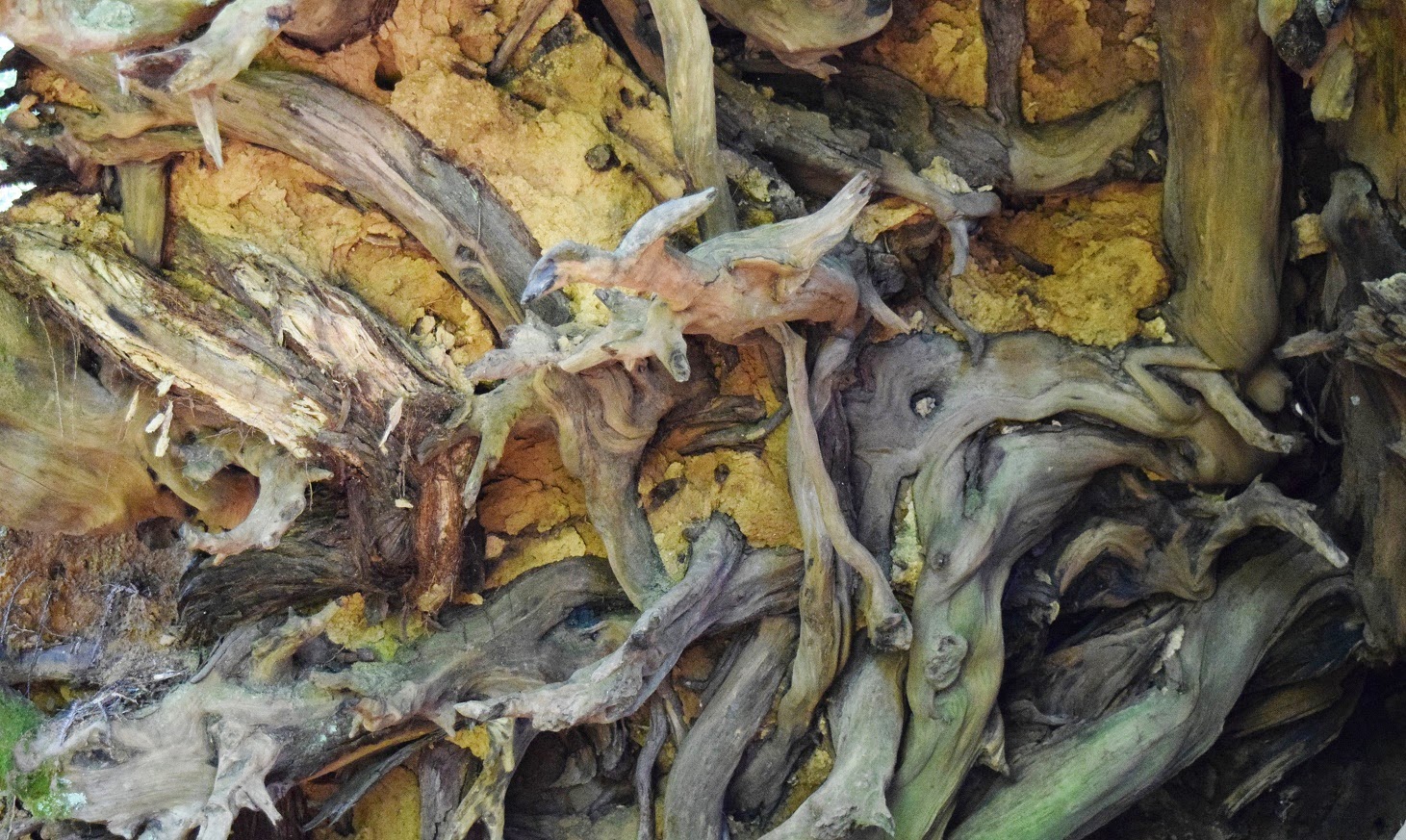 The parks are home to a variety of wildlife that mostly stay hidden in the forests. The exception would be the Roosevelt elk. They prefer prairies and open lands except when it is hot and they seek shade, as the herd below was doing.

They were watched over by this big bull, doesn't look like he'll be challenged by any young bucks for a while. 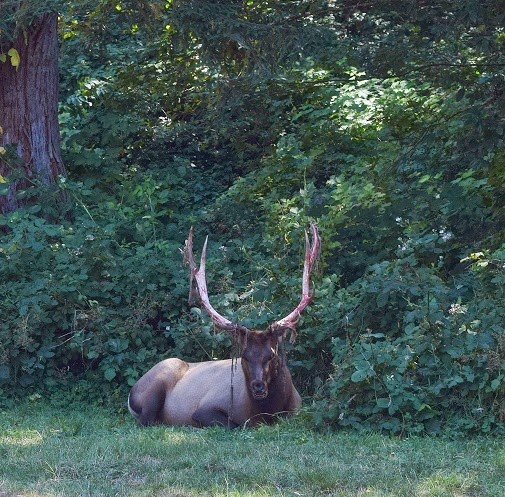 While exploring the redwoods we stayed at an RV park in Klamath, California. We had a great spot, right on the river where we could watch birds, seals, and all the boats going by. The coastal fog would dissipate in the morning and roll back in during the early evening hours. Nice. 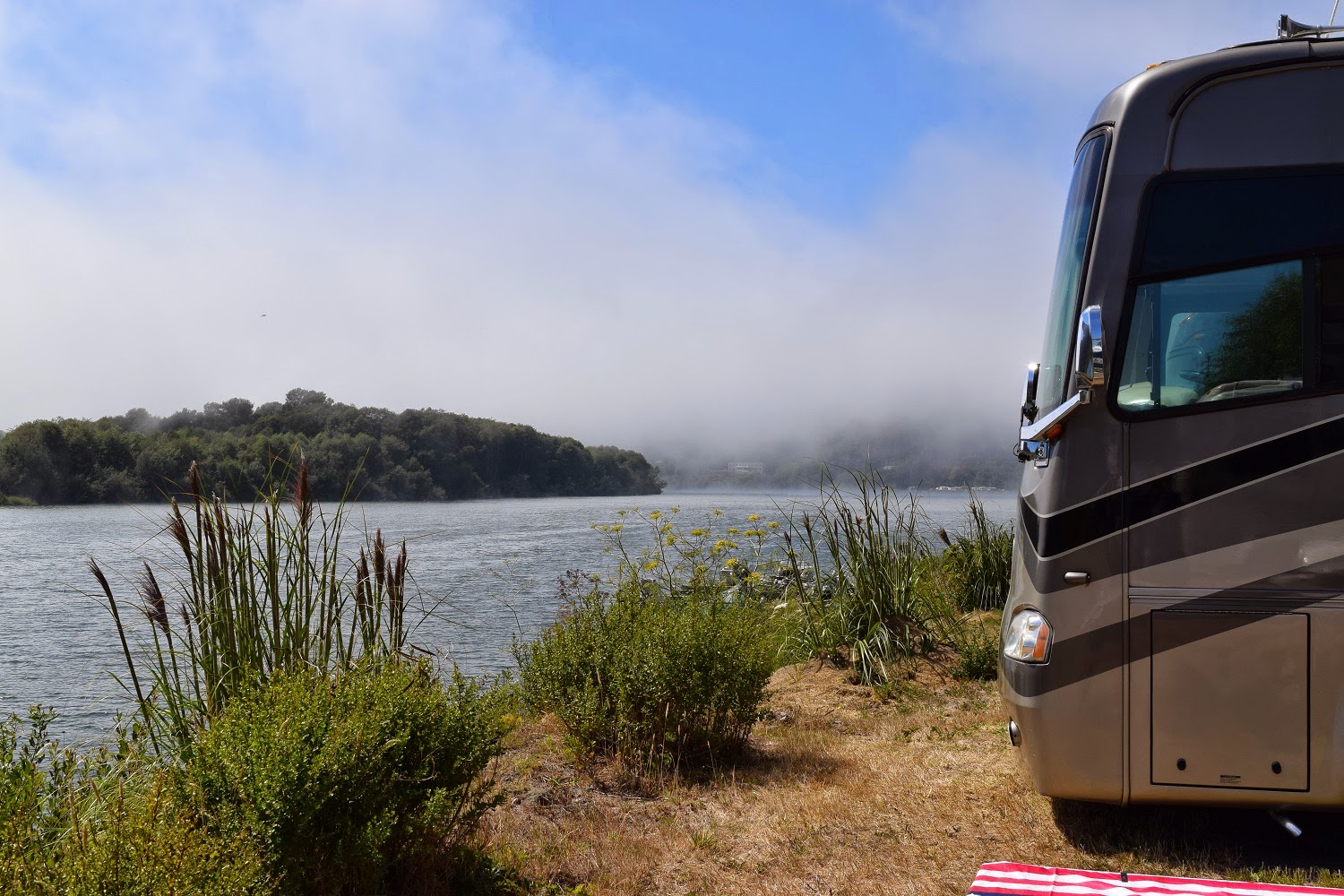 Our routes. Bandon, OR to Golden Bear RV Park in Klamath, CA, 125 miles. 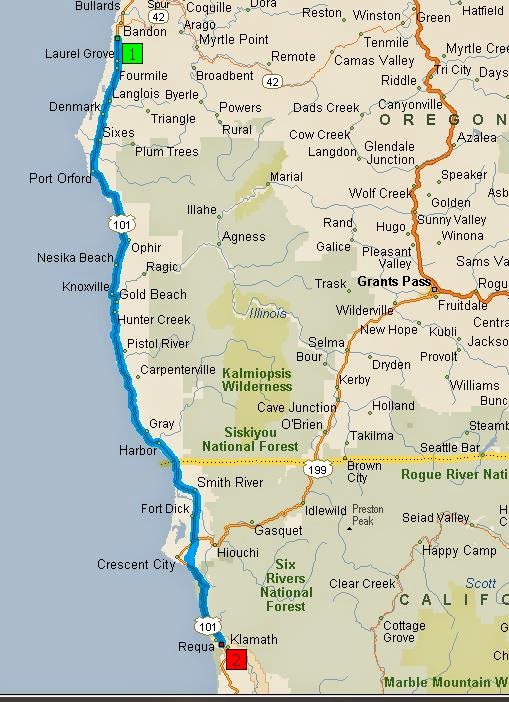 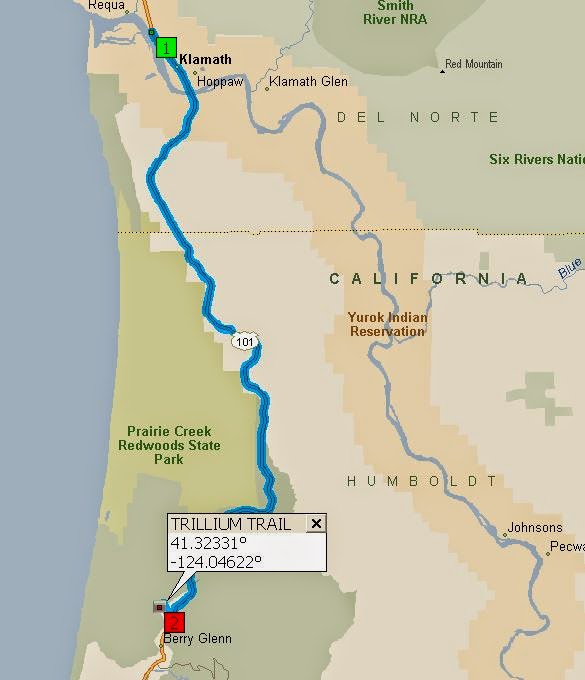 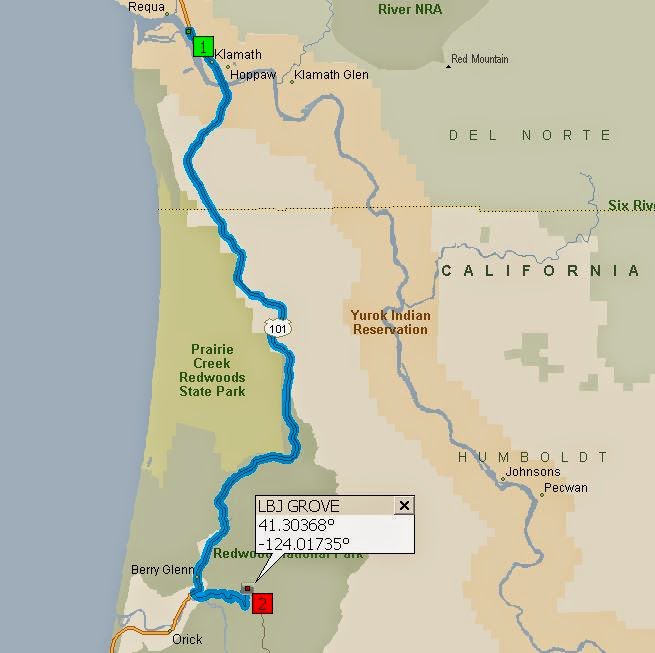