This is the fourth time we have been to Maine in our motorhome. Brian was stationed near Acadia National Park while in the Navy and has shared his appreciation of this beautiful state with me. 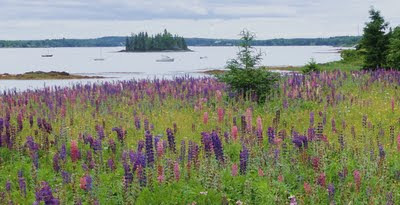 Our first stop in Maine is usually to visit our friend Bici. She spends her summers at her home on the island of North Haven. Both Brian and I are fascinated by Bici's house, which she designed, and could probably write a book about all of its unique features and construction. Truly a marvel.
We leave the Bus at an RV park in Camden and take the ferry over to the island. 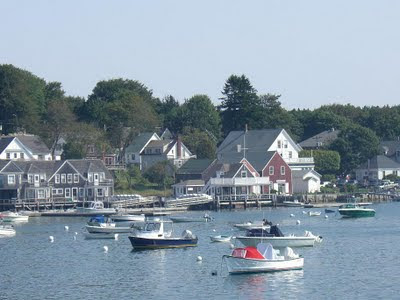 After a reunion of people and dogs we head up to Bici's house to continue our reunion and get caught up on each others' news. Bici is a gracious and fun friend who is also kind enough to supply us with fresh lobstah for a meal or two. Can't beat that. 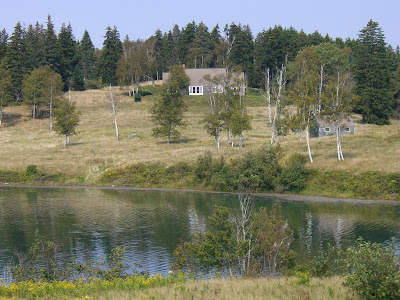 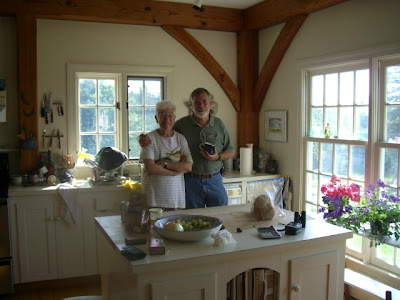 After taking the ferry back to the mainland we take a short ride up to an RV park in Ellsworth. From there we have access to Acadia National Park and Bar Harbor.
This view is from the top of the Bubbles in Acadia, overlooking Jordan Pond. A bit of a hike but well worth it. 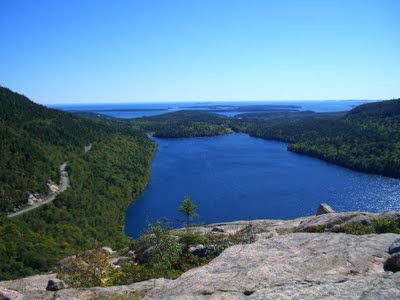 We kept trying to catch the fog rolling in while on top of Cadillac Mountain and finally succeeded. Cadillac Mountain is the first place in the United States to be hit by the sun and also the tallest mountain on the East Coast. 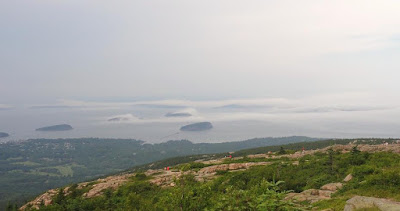 Most of Acadia National Park is on Mount Desert Island. There are also several small towns on the island where working lobstermen as well as wealthy people live. 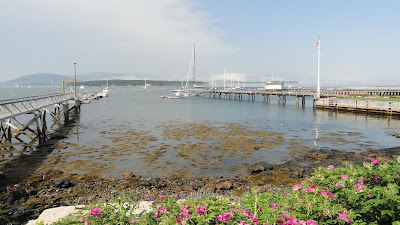 A small part of Acadia is on the Schoodic Peninsula near Winter Harbor. This area is where Brian lived and worked while stationed in the Navy. On the point there are huge rocks to walk and climb on. The ocean comes crashing into them as well as between them, creating some great blowholes. 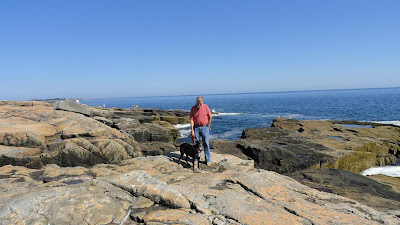 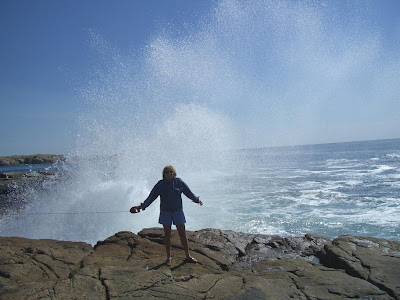 Rustic carriage roads are a unique feature of Acadia.  These roads were commissioned by John D. Rockefeller Jr.  Their construction from 1913 to 1940 resulted in roads with sweeping vistas and close-up views of the landscape. There are 45 miles of level, 16 foot wide roads which weave around the mountains and valleys of Acadia National Park. There are no motorized vehicles allowed - pedestians, bikes, horses and carriages only. We took a carriage ride that was really informative and enjoyable. They even invited Tilly to ride along. We think she looks like the Budweiser dog up on the front seat with Brian. 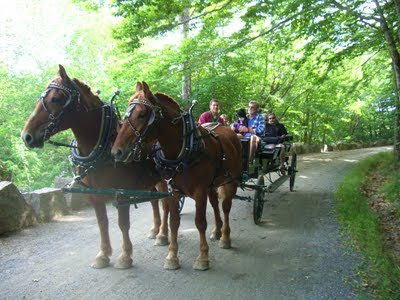