One of the reasons I thought a blog would be a good idea is that I could post things regularly and not have to write one long email or post to cover a large period of time. Great idea, but since we haven't had WiFi for quite a while that didn't work out quite as planned. So I will try to sum things up since the last post.

We stayed in PaaMul a total of 5 weeks which is a long time for us to stay in one place. We made some additional dives and took more daytrips, which was fun. My favorite dive was in a cenote. Cenotes are basically sinkholes that go to underground rivers and caves and the Yucatan is honeycombed with them. The water is extremely clear and there are stalagtites and stalagmites just as in caves above water. It's difficult to describe but I thought the dive was absolutely fantastic and an experience I would recommend to any of our diving friends.

MORE LIFE AMONG THE RUINS

After leaving PaaMul we visited the ruins and discovered a new form of exercise - pyramid climbing. The ruins were fascinating and each was unique in its own way. 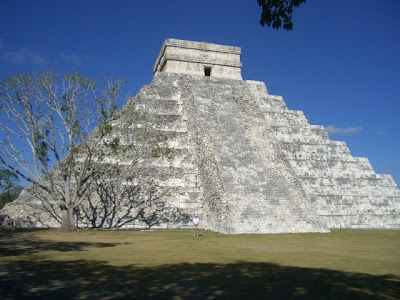 Chichen Itza is one of the must see ruins so of course we had to see it. The buildings and carvings are well preserved and the ruins cover a very large area so it took a long time to see it all. The main temple was huge - to get some idea of its size, click on the picture and you can barely see Brian standing at the bottom. We had the Bus about a mile from the entrance so we were able to get to Chichen Itza before most of the tour buses did which turned out to be a very good thing. Lots of buildings and ruins but also way too many vendors selling junk. Chichen Itza is so large that we spent most of the day there and saw just about all of it. 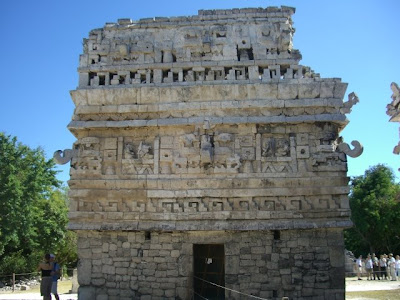 From Chichen Itza we were able to take the car and visit one of the lesser ruins which also turned out to be one of our favorites, Ek' Balam. It's fairly small but the restoration work on the carvings was remarkable. 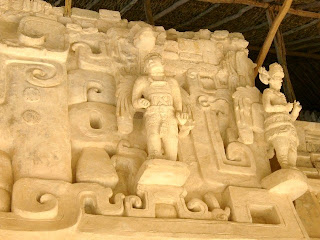 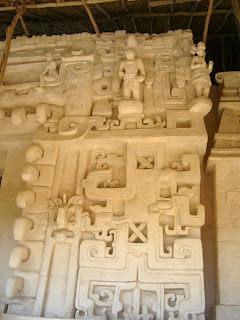 I climbed up the main pyramid and was able to see the carvings up close. Brian's knee was acting up so he stayed with Tilly while I took a picture of the two of them watching me try not to fall back down the steps. 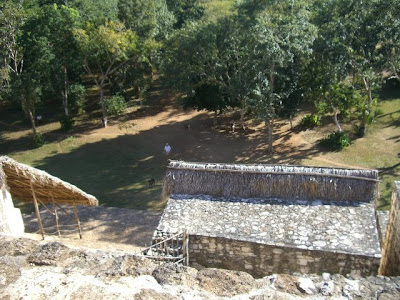 Our next stop along the ruins tour was Uxmal. This was especially interesting because we were able to go to a sound and light show that night. It was a bit basic but we enjoyed it just the same. We were able to park the Bus and spend the night in a lot at the entrance to Uxmal. There was also a nice restaurant so this was a great stop for us. I was fascinated by the Sorcerer's Pyramid which could be seen from a great distance as well as the surrounding buildings. 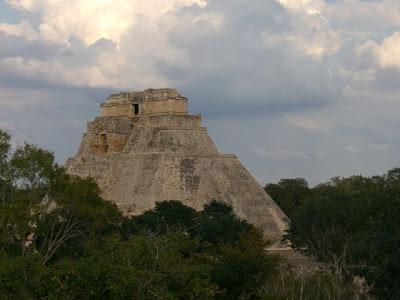 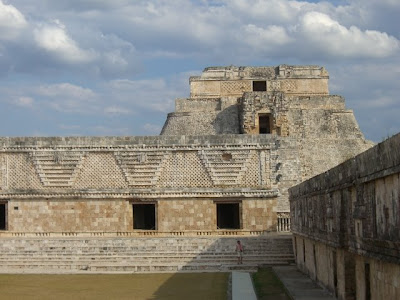 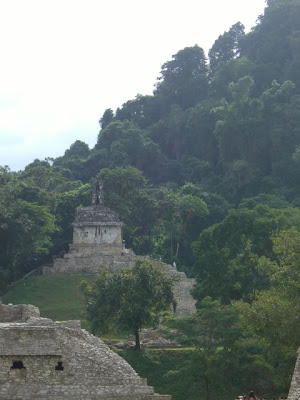 The ruins of Palenque are in very dense jungle and are amazing. The buildings, carvings and paintings are in remarkable shape, especially considering how the jungle encroaches on everything. Palenque was known as the jewel of the Mayan world and it's easy to see why. 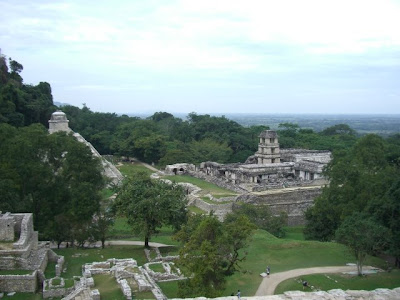 We were allowed to climb around and look at everything and were basically pretty astounded. Because of its location there weren't many tourists and we were able to get a little bit of a sense of what it must have been like to be in Palenque thousands of years ago. 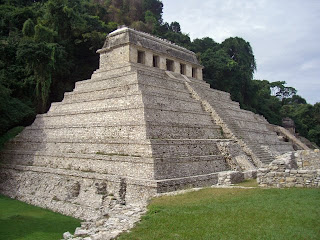 One of our favorite parts of the Palenque experience was the howler monkeys. The sound they make is difficult to describe - sort of a combination lion roar, elephant trumpet and monkey shriek - and very scary. We were able to walk into the jungle and spot three of them high up in the trees. If you would like to hear what they sound like here's a link.

If the link doesn't work, copy and paste the following to your address line and it will take you to the website.
http://animals.nationalgeographic.com/animals/mammals/howler-monkey.html 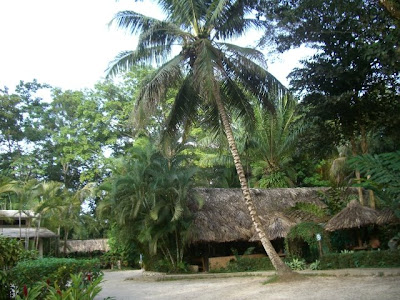 Staying in Palenque is like being in the middle of a '60s flashback. The RV park we stayed at was called the Mayabelle and was populated primarily by hippies, both young and old. The Bus was a bit large for the park but Brian managed to squeeze into a space. Fortunately the park wasn't full so he was able to maneuver us both in and out. There was a restaurant and live music every night, sometimes all night. We really felt as though we had entered a time warp and it was a bit of a surreal experience.

Since leaving Palenque we've been exploring the interior, or colonial, part of Mexico. We're now in Lake Chapala, just south of Guadalajara, and will head for the west coast tomorrow. I've got more adventures to share but the poor WiFi signal here is making this quite a project. Once we've got decent WiFi I'll try to pick up where I left off.
Posted by Sue and Brian at 4:16 PM